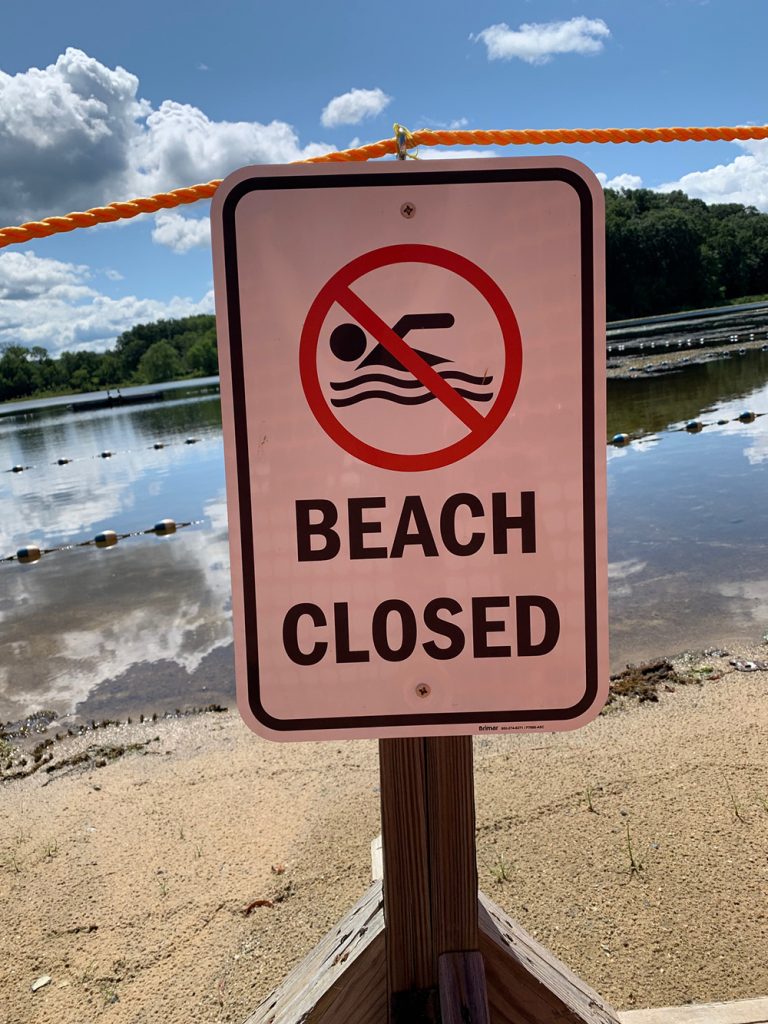 Beach closure due to a freshwater HAB in upstate NY in 2018.

Harmful Algal Blooms (or HABs) occur in both saltwater and freshwater environments and cause harm through several different routes of exposure.  The first category of impacts are caused by the toxins HABs produce, which can kill fish or shellfish directly, or may sicken humans or wildlife following the ingestion of contaminated seafood or drinking water.  HAB toxins causes a variety of human food poisoning syndromes, depending on the taxa and toxin involved. Exposure to toxins can also occur via skin contact during swimming or exposure to algal toxins that are aerosolized.

Another category of impacts is associated with high biomass accumulation during algal blooms, which can cause environmental damage or degradation.  These effects can include light attenuation, clogging of fish gills, or depletion of dissolved oxygen upon decay of the algal cells.  Some HABs can even kill fish through mechanical damage (i.e., their physical shape causes cells to lodge in gill tissues, leading to death).  HABs can also alter food web dynamics through impacts such as physiological stress and increased susceptibility to disease, and feeding impairment by avoidance of toxic prey, which in turn can alter the energy flow within an ecosystem.  Impacts of disruptions to food web dynamics by HABs can include decreasing biodiversity, and temporarily or permanent degradation of important habitats.

In recent years, HABs have also gained national and international attention due to their impacts to drinking water supplies around the world.  In the U.S., the state of Ohio declared a state of emergency after algal toxins (microcystin) were found at levels exceeding the safety threshold for drinking water in the city of Toledo's water supply.  This event, which sickened 110 people, left approximately 500,000 people without drinking water for three days.  Elsewhere in the world, arid coastal countries rely on seawater desalination as a major source of drinking water. Operation of these facilities has been threatened by toxic and non-toxic HABs, both from the risk associated with the presence of neurotoxins and skin-irritating compounds in treated water, as well as damage to plant operations from compounds that clog intake filters and foul membrane surfaces.

The growing prevalence of HABs presents an ongoing threat to human health, the health of wildlife and ecosystems, and costs the U.S. economy millions of dollars every year from losses to tourism, aquaculture, and fisheries.  These impacts can also diminish the well-being and culture of local communities through degradation of local aesthetics, disruption of recreational activities, and losses to traditional ways of life that contribute to a community's collective identify.

For more information on the specific impacts of marine and freshwater HABs, please explore the links at right.