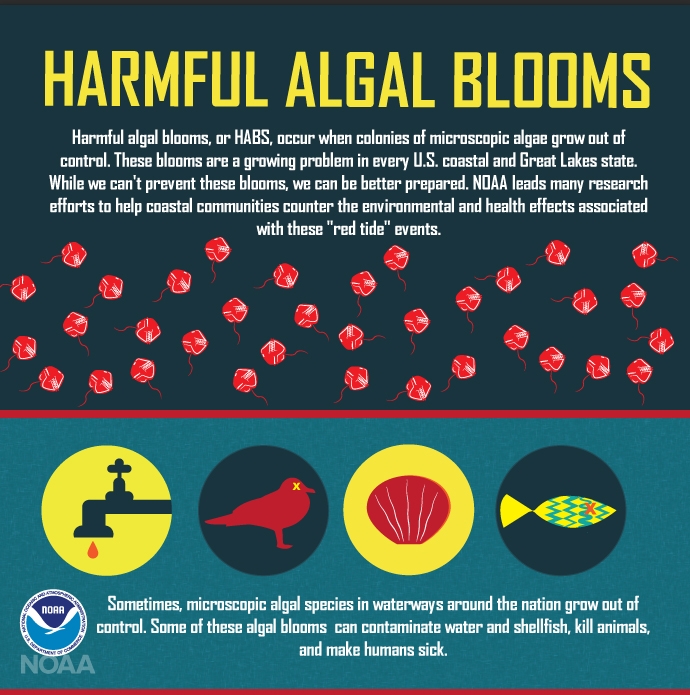 Harmful algal blooms, are a growing problem in every U.S. coastal and Great Lakes state. While we can't prevent these blooms, monitoring programs help coastal communities counter the environmental and health effects associated with these events. (NOAA)

Although only some HAB species produce toxins that enter the food web, their impacts are the most significant in terms of human illness and death.  This can occur when toxin-producing phytoplankton are consumed by shellfish such as clams, mussels, oysters, or scalps during filter feeding, accumulating to levels that can cause illness or even death to consumers. In the U.S., state management programs are responsible for monitoring the concentration of HAB toxins in shellfish and closing shellfish beds for harvest if levels exceed limits for safe consumption. Marketable shellfish are generally considered to be safe, but in spite of these precautions, there are known illnesses. Fish can also accumulate toxins, either through the direct ingestion of toxin-producing HABs and their grazers, and also via uptake and transfer of algal toxins in the food web.

The shellfish poisoning syndromes identified thus far include paralytic, diarrhetic, neurotoxic, azaspiracid, and amnesic shellfish poisoning (PSP, DSP, NSP, AZP, and ASP, respectively), reflecting the symptoms that are caused by specific toxins involved in each syndromes. The syndrome known as ciguatera poisoning (CP) is caused by the production of a toxin by a specific group of benthic dinoflagellates that are found on the the surfaces of turf and macroalgae in coral reef communities.  Dinoflagellates are also the source of toxins that cause the shellfish poisoning syndromes PSP, DSP, NSP, and AZP, while ASP is caused by domoic-acid producing diatoms.

With the exception of AZP, all of the aforementioned shellfish poisoning syndromes are known problems within the US and its territories, affecting large expanses of coastline. The toxins associated with AZP have been detected in Puget Sound, WA, but have not been linked to human poisoning in the U.S.  Additional information regarding the causative organisms associated with each syndrome and their geographic distribution can be found HERE.

In addition to their accumulation in shellfish, some HAB toxins can be released directly into the water or air, either naturally, or following cell disruption by turbulence or through human activities such as water treatment processing. This can lead to mortality of aquatic organisms and animals of all types, as well as impacts to human health. One example of released toxins that cause human health problems occurs in the Gulf coast of Florida, where air-born neurotoxins from blooms of the NSP-causing dinoflagellate Karenia brevis can cause respiratory irritation and other symptoms in residents and beachgoers. Ongoing studies are examining whether repeated exposure to this route of intoxication has long-term impacts.

In freshwater systems throughout the U.S., several groups of bloom forming cyanobacteria, especially taxa from the genera Anabaena, Aphanizomenon, Microcystis, and Cylindrospermopsis, produce potent toxins that cause severe neuro-, cyto- and hepato-toxicity in a variety of mammals (including humans and farm animals), birds, fish, and invertebrates (including zooplankton). Harmful cyanobacteria blooms (also known as CyanoHABs) are potential public health threats in nearly every state in the US due to their presence in drinking and recreational waters. Additional information about the impacts of harmful cyanobacteria can be found HERE. 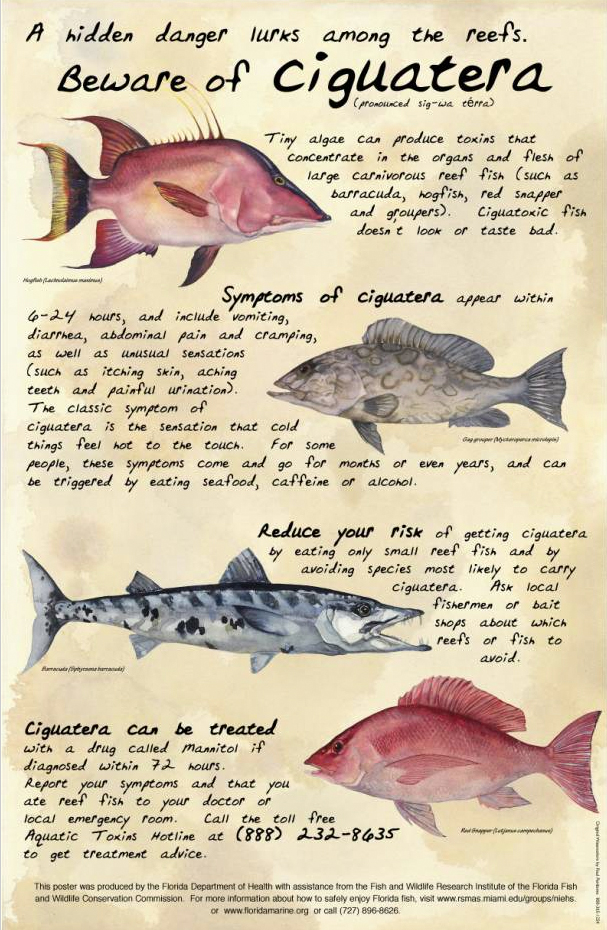 Ciguatera advisory poster created by the Florida Department of Health.

Of all the poisoning syndromes associated with HABs, ciguatera poisoning (CP) is the most frequently reported seafood-related illness in the U.S., and the most common foodborne illness related to fish consumption in the world.  Dozens of fish species have been linked with CP, including grouper, barracuda, jack, snapper, mackerel, hogfish, and triggerfish.  However, the true public health impact of this disease is significantly underestimated, as there is no confirmatory laboratory test and symptoms can be mistaken for bacterial food poisoning.  Clinical diagnosis is generally based on consumption of fish associated with CP, a patient's travel history (if an individual is seen outside of a ciguatera endemic area), and characteristic neurological symptoms.  Laboratory testing of meal remnants for ciguatoxin can confirm a CP diagnosis, but this is often not feasible. Diagnoses can be particularly challenging for physicians in northern or inland states, who may infrequently encounter CP and other marine HAB poisoning syndromes.

Globally, it is estimated that as many as 200,000-1,000,000 individuals are poisoned by CP annually with estimated incidence rates of 500 to 2,500 per 100,000 population (GESAMP 2001).  In the Virgin Islands, nearly 50% of the adults are estimated to have been poisoned at least once.  CP occurs in virtually all sub-tropical to tropical U.S. waters (i.e. Florida with isolated events from Texas to the Carolinas, Hawaii, Guam, Virgin Islands, Puerto Rico and many Pacific Territories).  CP is a particular risk to U.S. tourists to these regions and is not restricted to endemic regions as a consequence of modern transportation networks and global trade in fish products.  Seafood consumers from San Francisco to Chicago to Vermont have been poisoned.