The potential for acute as well as chronic risk from multiple toxin exposures in affected systems is a growing concern, particularly those with endemic marine and freshwater HABs. This phenomenon has been documented in estuaries impacted by both marine HABs entering from coastal waters and freshwater HABs transported from upstream rivers.  The presence of multiple toxins in these ecosystems presents significant monitoring challenges, as impacts from toxins can be associated with both acute and chronic exposures, and the intensity and duration of different HABs in these ecosystems can be highly variable and driven by different physical and biological conditions.  Furthermore, certain toxins that may present acute risk could be ones that are only present episodically, and are not routinely monitored.   Co-occurrence of HAB toxins in shellfish has been documented, and multiple toxins have also been detected in marine mammal stranding events.  The impacts of longterm and sublethal exposure to algal toxins has been shown to have significant negative health impacts to animals, but it is not know whether these impacts might be magnified by exposure to multiple toxins with differing health effects.

Although data on these types of effects are still emerging, examples of several systems with demonstrated impacts from multiple algal toxins are provided below: 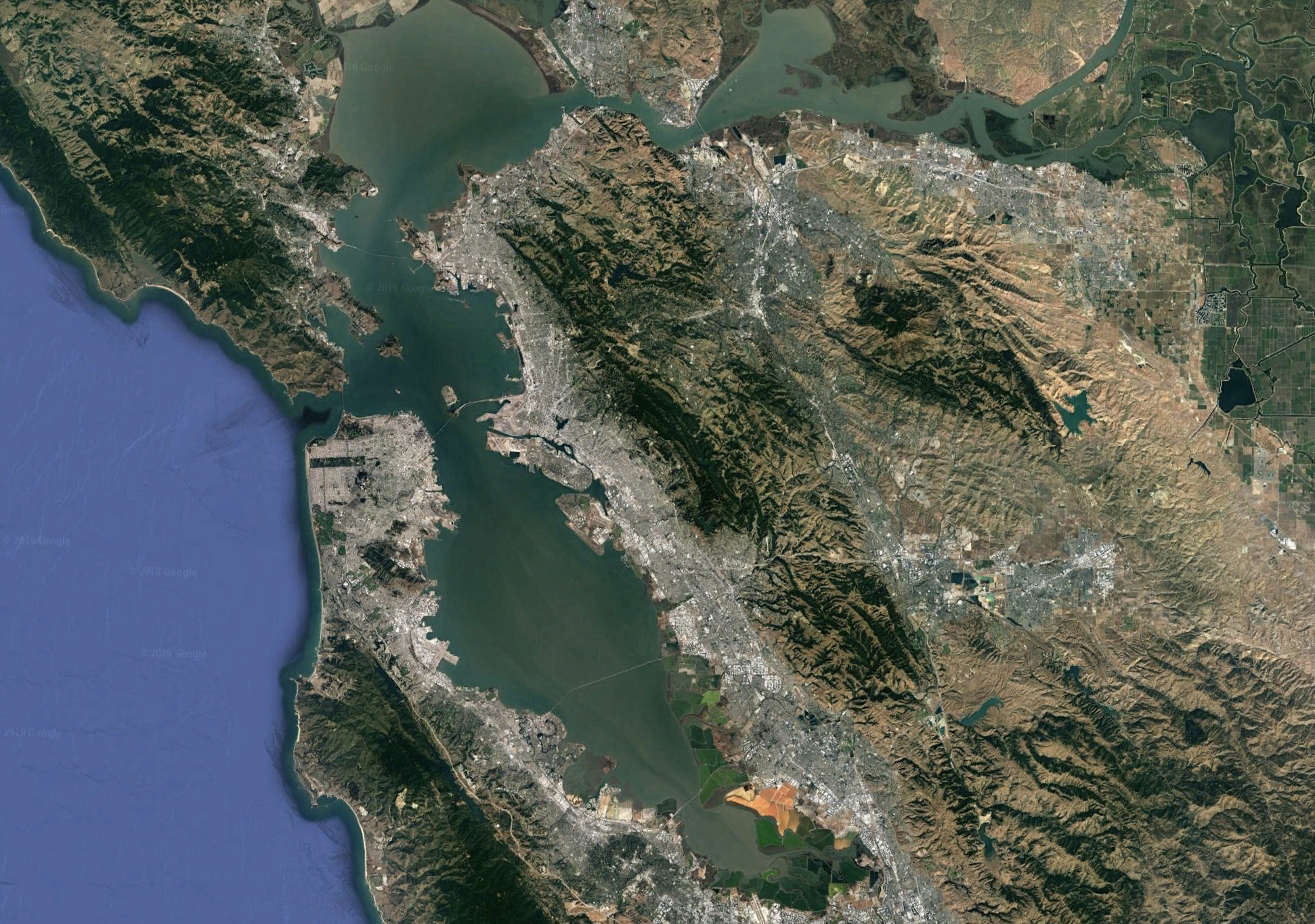 Multiple HAB species and their toxins have been shown to occur in San Francisco Bay, including marine species such as Pseudo-nitzschia, Alexandrium, and Dinophysis, as well as freshwater species such as Microcystis, which are transported into the estuary during high-flow events.  Four different kinds of algal toxins have also been detected in shellfish (mussels) collected from the Bay, demonstrating co-occurrence of both freshwater and marine toxins in mussels consumed by humans and animals. Even though San Francisco Bay lacks commercial shellfish operations, people still harvest and eat mussels from the bay, and contaminated mussels pose a serious health threat to people and animals who eat them. While commercially harvested shellfish are generally safe because they undergo regular testing, neither microcystins nor Dinophysis shellfish toxins are routinely monitored in California shellfish. Learn more. 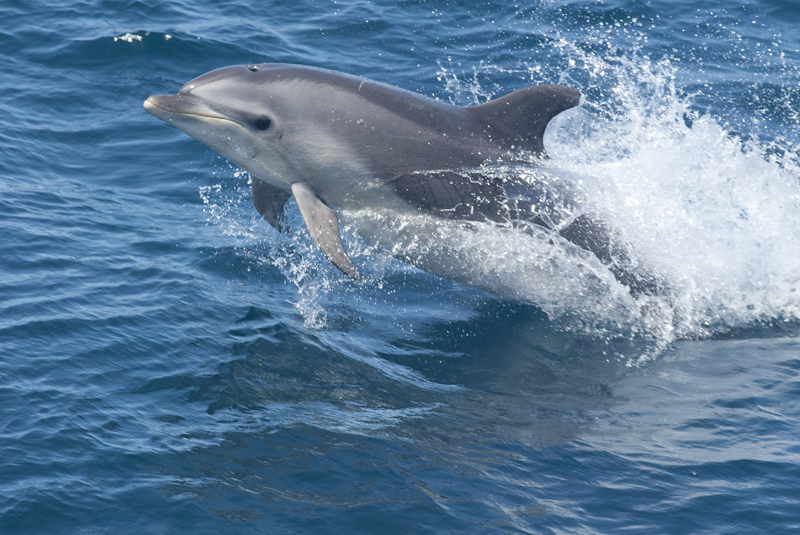 The marine waters of Florida's Gulf Coast are affected by blooms of multiple HAB species, including Karenia brevis, toxic Pseudo-nitzschia species, and the brown tide bloom forming species Aureoumbra lagunensis. Persistent and widespread blooms are associated with the most severe impacts, causing human respiratory irritation, shellfish harvest closures, and numerous fish kills and marine mammal mortalities. In addition to marine taxa, freshwaters released from Lake Okeechobee have transported Microcystis into estuarine and coastal environments. There is evidence that multiple algal toxins are entering food webs, and a decade-long study determined that the resident bottlenose dolphin population is frequently exposed to at least two algal toxins on a near annual basis.  Learn more. 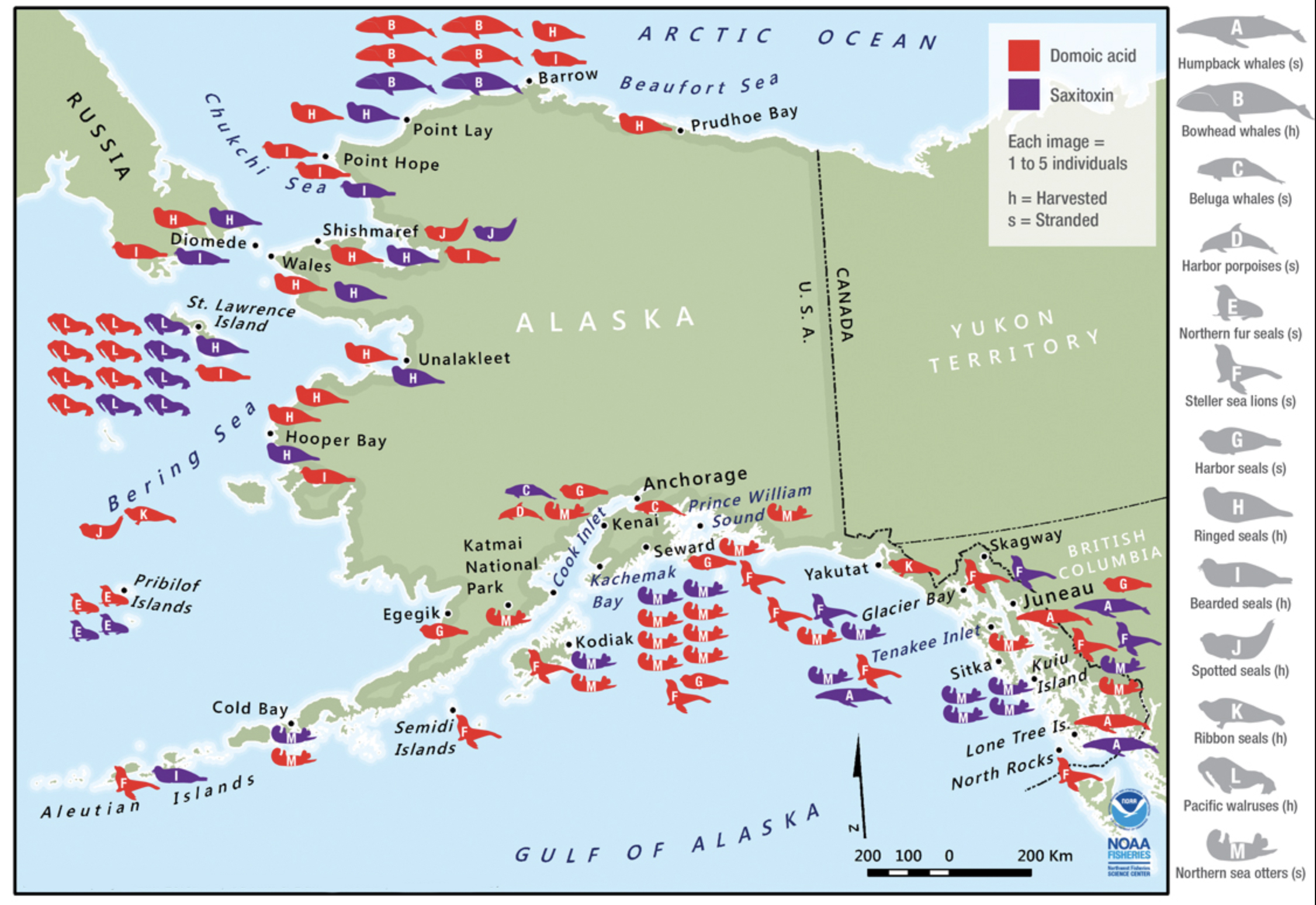 Algal toxins were detected in 13 marine mammal species from Southeast Alaska to the Arctic Ocean from 2004-2013. Adapted from Lefebvre et al. (2016).

Recent research has documented multiple toxins in Alaskan marine food webs, which were detected in marine mammals stranded or harvested throughout Alaskan coastal waters, from southeast Alaska to the Arctic Ocean. Of the 905 marine mammals sampled, algal toxins (either domoic acid or saxitoxin) were detected in at least one animal from all 13 marine mammal species sampled, and 46 individuals contained detectable concentrations of both toxins.  The number of species and extensive geographic range over which these algal toxins were detected shows that toxin exposure and associated health risks are widespread in Alaskan waters, and the detection of multiple toxins indicates the potential for combined exposure risks. Learn more.