The demand for seafood as part of a healthy diet, combined with globalization of trade and tourism, expands the geographic boundaries for human exposure and subsequent illness as well as those of economic losses beyond historically affected coastal communities.  The economic and public health impacts of HABs can be profound. 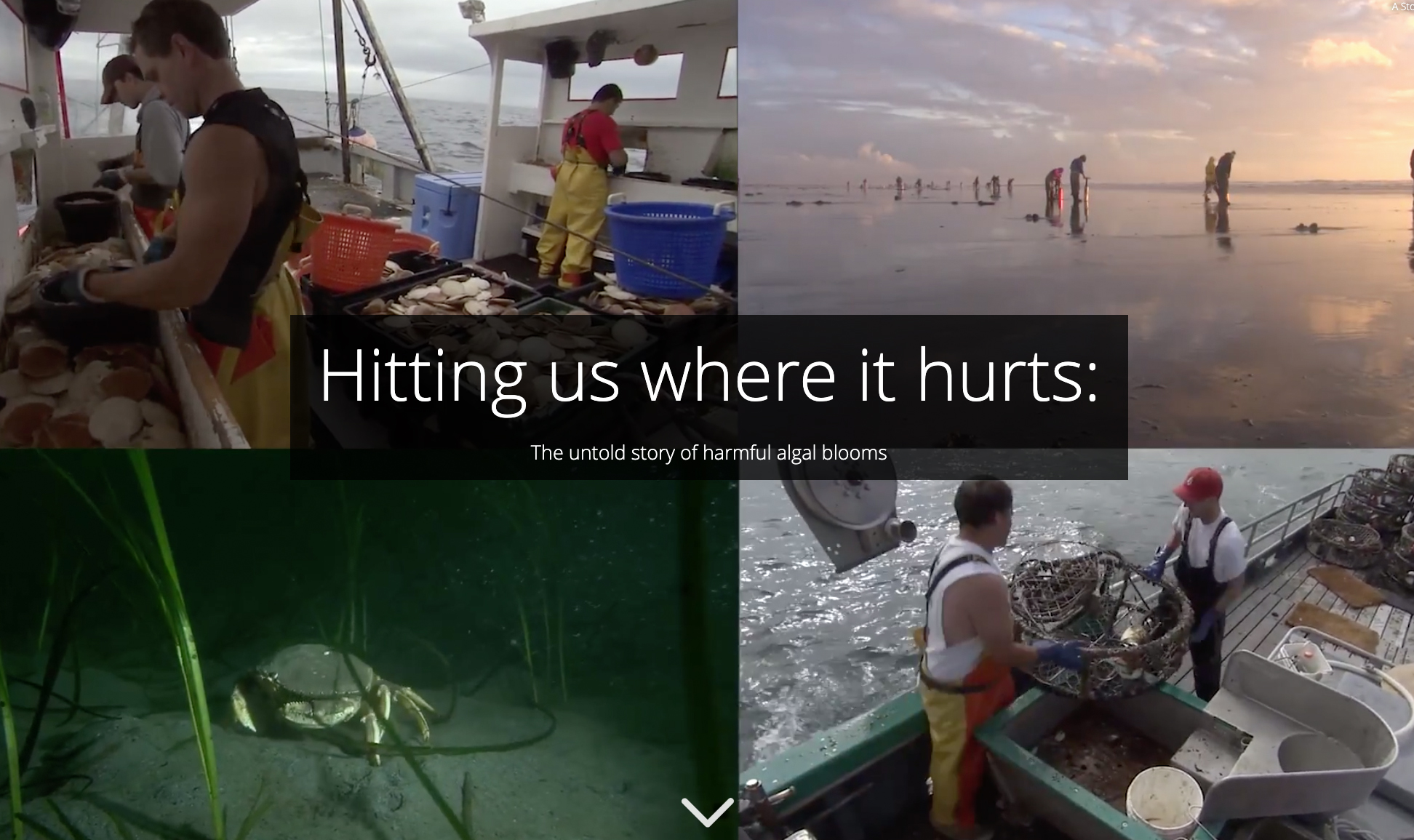 Clam diggers along the Washington state coast. Fishery closures in Washington state waters due to blooms of the diatom Pseudo-nitzschia has resulted in millions dollars in lost income, which can have tremendous economic and ecological effects.

A preliminary and highly conservative nationwide estimate of the average annual costs of HABs is approximately $50 million.  Public health is the largest component, representing nearly $20 million annually, or about 42% of the nationwide average cost.  The effect on commercial fisheries averages $18 million annually, followed by $7 million for recreation and tourism effects, and $2 million for monitoring and management.  The actual dollar amount of these estimates is highly uncertain due to a lack of information about the overall effect of many HAB events and a difficulty in assigning a dollar cost to those events that we do understand.  While many expenses may be difficult to quantify, there is little doubt that the economic effects of specific HAB events can be serious at local and regional levels.

Separate from the national average, massive losses from isolated, individual events underscore the severity of the problem.  A recent PSP event in New England caused estimated losses of $12 to $20 million in Massachusetts alone, with additional losses in New Hampshire and Maine.  Continual PSP intoxication in Alaskan shellfish is one factor blamed for the lack of development of a commercial, wild shellfish industry, estimated to be worth $6 million annually.  Blooms of one of the brown tide organisms, Aureococcus anophagefferens, devastated the bay scallop industry in Long Island, estimated to be worth $2 million annually.  Outbreaks of Pfiesteria-like organisms in 1997 in Chesapeake Bay tributaries resulted in a collapse of seafood sales and boat charters, with losses to watermen, seafood dealers, and seafood restaurants approximating $43 million.

HABs have an effect on recreation, tourism, and local aesthetics by diminishing the quality of the environment.  This can manifest in a variety of ways in different regions of the country.  Some examples are:

HAB occurrences affect consumer perceptions of the safety of uncontaminated shellfish, reducing the demand for shellfish and affecting the fishing and aquaculture industries even where there is no contamination.  Freshwater HABs can similarly affect the perception of drinking water safety, impacting decisions by consumers and public utilities.

Estimating the full range of societal impacts of HABs is as difficult as estimating human behavior in response to a traumatic event.  Working patterns can be disrupted when fishermen seek alternative occupations or sources of income and restaurants seek alternate suppliers for their seafood.  Charter boat reservations and pier attendance for recreational fishermen in Florida can be reduced during HAB events because of fish kills, respiratory irritants, and misinformation about HABs.  Vacations can be ruined, and some may never visit an impacted region again.  People who have retired to coastal or lake shore homes may find their property values are adversely affected when HABs frequently occur.

Seafood Safety
Seafood constitutes a significant portion of the world food supply with more than 70 million metric tons harvested each year.  Estimated seafood consumption is 9 kg per person per year in the U.S.  Although an important and popular food source, seafood ranks third on the list of products most frequently associated with food-borne disease.  Several seafood related diseases are caused by contamination of seafood with potent neurotoxins naturally produced by marine algae associated with HABs.

Recreational and Drinking Water
Cyanobacteria are a component of freshwater and marine ecosystems.  The abundant growth of cyanobacteria in reservoirs contributes to significant practical problems for water supplies.  Moreover, many of the known cyanotoxins (e.g., microcystins, saxitoxins) have been associated with deleterious human health effects.  The full impact of the presence of these toxins on contaminated water bodies remains unknown.

Tens of thousands of visitors are drawn to Washington and Oregon coastal communities to harvest razor clams recreationally.  The economic contribution of these visitors is especially important to small coastal communities during the quiet fall, winter, and early spring months.  Since 1991, high levels of domoic acid have resulted in three year-long closures of these fisheries.  The economic impact in terms of reduced recreational spending of the most recent of these closures has been estimated to be between $10 and $12 million.  In addition, the Native American coastal tribes who posses fishing rights for razor clams have also been heavily impacted by the closure of their commercial and subsistence fisheries.  The coastal Dungeness crab, another key commercial fishery, has experienced disruptions with closures in portions of the fishing grounds and continues to face the real threat of future closures over much wider areas.

Impacts from HABs affect freshwater and marine aquaculture industries.  In the ocean, large numbers of salmon and other farmed fish can be killed in just a few hours, succumbing either to toxic algae or to species that kill in other ways.  For example, in 1987, phytoplankton blooms of the non-toxic diatom Chaetoceros convolutus were linked to the mortality of 250,000 Atlantic salmon valued at over $500,000.  The diatoms lodged in the gill tissues, causing excessive mucus production, suffocation, and death.  Blooms of the toxic raphidophyte Heterosigma akashiwo have caused even more extensive farmed-fish mortalities in Washington state. The NOAA Center for Sponsored Coastal Research provided funds for limited field work and compilation of a summary of past H. akashiwo blooms, the causes and distribution as summarized in the report, "Fish kills from the harmful alga Heterosigma akashiwo in Puget Sound:  Recent blooms and review.  Freshwater aquaculture operations are also subject to risks from cyanobacteria and other HAB-producing toxins that kill the fish or accumulate in tissues. 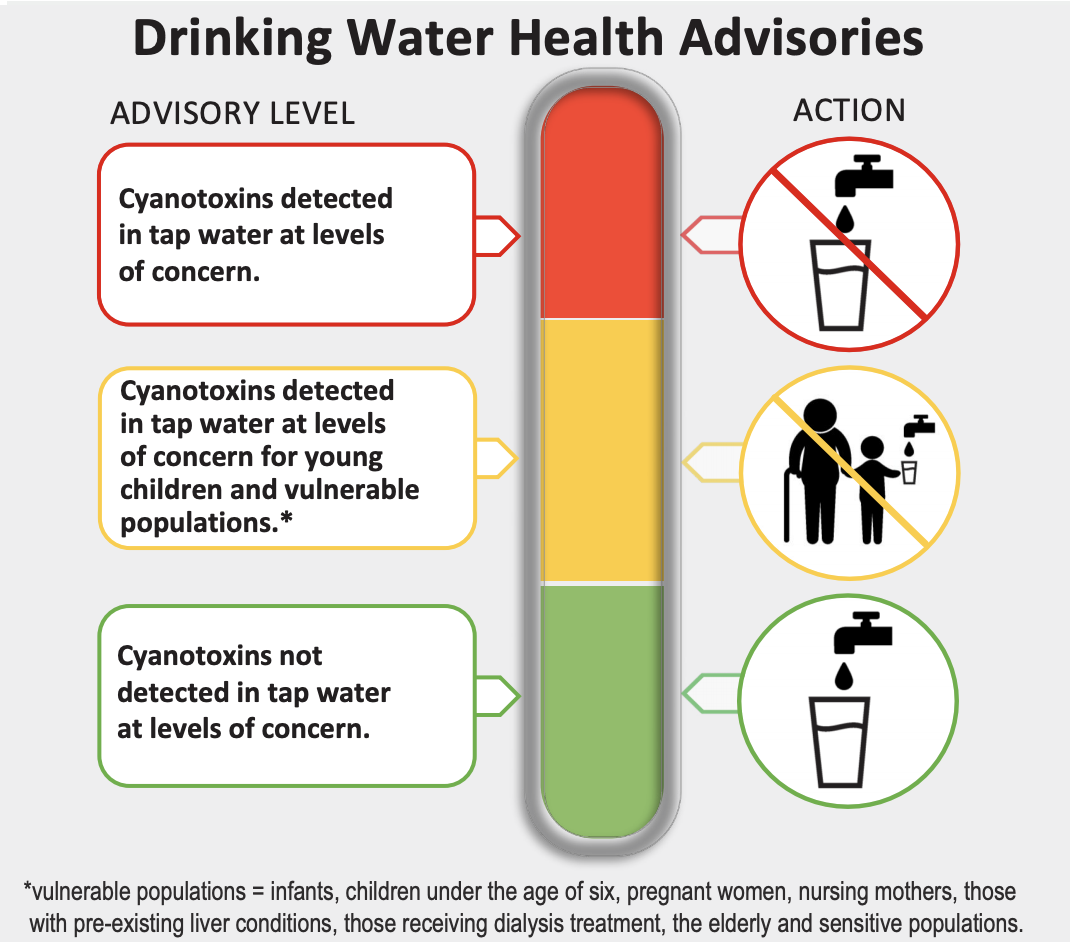 weather, abundant nutrients),  these cyanoHABs can be present at extremely high densities.  When this occurs in source waters for drinking water supplies, the presence of such high densities of cyanoHABs can cause taste and odor problems, and can also pose health risks to humans if cyanotoxins are fully removed during the water ptreatment process.  Conventional water treatment generally consists of several steps, including coagulation, filtration, chlorination, and these process geenral remove cyanobacterial cells and their toxins.  However, during severe bloom events cyanotoxins may not be fully removed during water treatment, and occur in finished drinking water.  To aid in managing risks from cyanotoxins, the US EPA has established drinking water health advisories for the cyanotoxins microcystins and cylindrospermopsin, and published health effects suppor documents for the canobacterial toxins anatoxin-a, cylindrospermopsin, and microcystins (all maybe be accessed here). The health advisories provide the cyanotoxin levels in drinking water less than or equal to which adverse human health impacts are unlikely to occur when exposed to these levels over a 10-day time period.

An emerging problem in the U.S. is the impact from golden-algal blooms caused by Prymnesium parvum, a species that thrives in brackish water typical of rivers and reservoirs in parts of Texas, Oklahoma, and Wyoming.  Fish kills attributed to P. parvum were first documented in the U.S. in 1985 in Texas.  Since that time, 41 different fish kills have been linked to P. parvum in Texas, killing over 18 million fish worth an estimated $7 million.  The majority of major kills have occurred since 2000 as this toxic alga has been found in an increasing number of river basins in the state.  Local communities have experienced huge financial losses as tourists stay away and fishing guides lose their customers.  Prymnesium parvum poses a threat to cultured as well as native fish in rivers and lakes.  In the 1940's P. parvum caused significant fish mortality in Israeli aquaculture ponds and  in 2001, it killed the entire year's production of striped bass at Texas' Dundee State Fish Hatchery with over 5 million fish lost.