Gambierdiscus species are anteroposteriorly compressed dinoflagellates that are approximately 40-140 µm wide with yellow to brown chloroplasts. They are predominantly found in coral reef ecosystems as epiphytes on macroalgae and seagrass, and produce mucous which they use to tether or attach to surfaces. When disturbed, they are able to swim to a new substrate and occasionally are found on dead coral, sand, or in the plankton. Certain Gambierdiscus species produced ciguatoxins (CTX), which are a complex group of potent neurotoxins that can accumulate to dangerous levels in coral reef fish and invertebrates, and cause Ciguatera Poisoning (CP) in human consumers of seafood contaminated with these toxins

Taxonomic studies have identified at least 18 species within the Gambierdiscus genus, many of which co-occur and differ significantly in toxicity.  At least ten of these species have been found in tropical and subtropical regions of the U.S., including Hawai’i, the Gulf of Mexico, the Florida Keys, Puerto Rico, and the U.S. Virgin Islands.  Temperature is a key factor controlling CTX occurrence, and laboratory experiments investigating the influence of temperature on growth of various Gambierdiscus species have shown that most species exhibit maximum growth rates between 24–30°C, but that growth responses varied by species. For example, temperature tolerances vary among species, although all are sensitive to higher temperatures, with steep declines in growth as temperatures exceed ~31°C. Thus higher temperatures may favor growth of more thermally tolerant species in ciguatera endemic regions, and promote establishment of species shown to be less tolerant in subtropical and temperate regions. Warm surface temperatures may also favor increased abundance of Gambierdiscus populations in deeper waters.

There is recent evidence of geographic range expansion of Gambierdiscus and CP into higher latitudes in U.S. waters, associated with climate-driven warming. Over the past two decades CP and CTXs were reported for the first time in the northern Gulf of Mexico, and ephemeral populations of Gambierdiscus have also been documented in North Carolina.  Prolonged periods of elevated water temperatures at these locations and in northern Florida are hypothesized to result in increased Gambierdiscus and Fukuyoa cell densities,

Gambierdiscus species produce a variety of toxins including ciguatoxin, gambiertoxin, and maitotoxin. The toxins of most concern are the ciguatoxins (CXTs), which activate voltage gated sodium channels on cell membranes. As Gambierdiscus are epiphytic on macroalgae, cells are are inadvertently eaten by herbivorous reef fish and invertebrates while they graze on seaweeds, and these fish accumulate ciguatoxins in their body tissues.  CTXs enter the coral reef food web via grazing by herbivorous fishes and invertebrates, and can be bioaccumulated and concentrated in fish at higher trophic levels.  Toxin levels are frequently highest in carnivorous reef fishes, many of which are targeted by commercial and recreational fisheries, although a wide variety of species have the potential to be ciguatoxic.  When humans eat CXTs contaminated seafood, they experience gastrointestinal, cardiac and neurological symptoms, a disease know as ciguatera poisoning (CP) where the neurological symptoms may last even years later.  Even though CP is one of the most frequently reported marine toxin related illnesses in the world, there are no specific treatments.

Of all the poisoning syndromes associated with HAB toxins, CP caused by CTX is the most prevalent globally, and is estimated to afflict tens of thousands of people each year, with many cases unreported.  Unlike many other HAB poisoning syndromes, CP is not associated with large scale blooms of the causative organism, and monitoring programs to test fish for CTXs have been hindered by complex toxin chemistry and involvement of multiple toxins, as well as the lack of commercially available toxin standards and affordable and practicable methods for toxin detection.  In the absence of monitoring programs, prevention of CP largely relies on avoidance of high-risk carnivorous fish species most commonly associated with outbreaks (e.g., barracuda, snapper, grouper) as well as local ecological knowledge regarding the distribution of toxic fish, which can function as an informal type of "closure," in which high risk locations are avoided.

Common fish vectors of Ciguatera in the Pacific 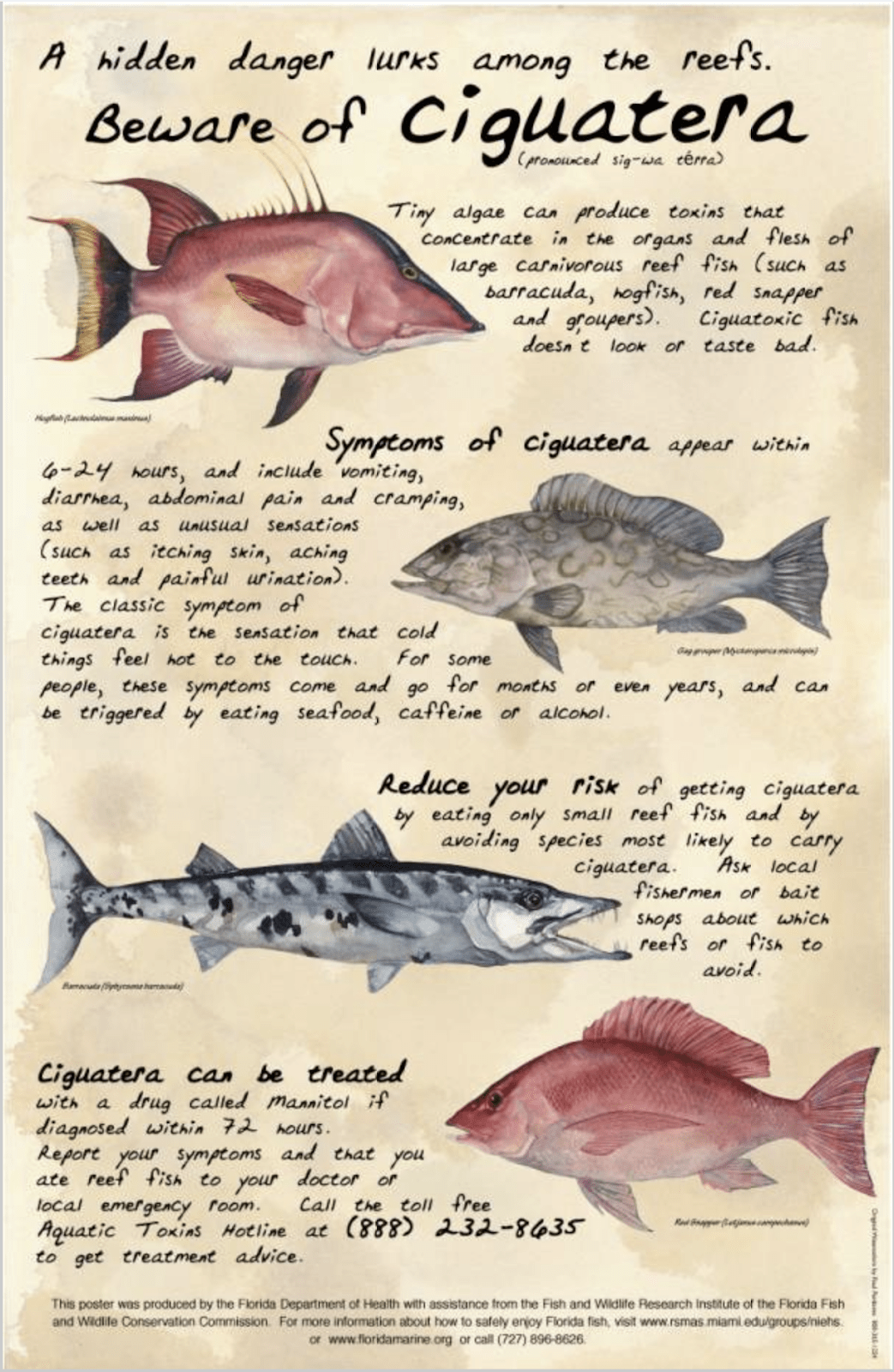 This genus is named after the Gambier Islands of French Polynesia where they were first collected and identified, and Gambierdiscus species can be found in tropical waters around the world. At least ten of these species have been found in tropical and subtropical regions of the U.S., including Hawai’i, the Gulf of Mexico, the Florida Keys, Puerto Rico, and the U.S. Virgin Islands  (see CP map). Not all species are globally distributed, and this includes the most toxic species identified thus far.  For example, G. polynesiensis has been reported in the Pacific (including Hawai’i) but not in the Caribbean, while G. silvae and G. excentricus have been found at locations in the Caribbean and Gulf of Mexico, but not in the Pacific or Indian Oceans.  Several species – G. carpenteri, G. caribaeus, G. carolinianus– are widely distributed, and have been found at locations in both the Pacific Ocean and Caribbean Sea.