There is a general consensus that prevention is the preferred management strategy for HABs, but this management strategy can be difficult to implement, and there are presently few active efforts aimed at directly preventing blooms.  A growing field of research is focused on methods and technologies to control or suppress blooms.  These approaches include strategies that kill HAB organisms or limit growth, and/or physically remove cells and toxins from the water column. Bloom control or suppression activities can be controversial, however, due to concerns regarding unintended ecosystem impacts of these controls. Most mitigation studies fall under four broadly defined categories, summarized below.  In practice, perhaps the best known involves physical or mechanical control (e.g., flocculation), but in addition to mechanical control, there are several other categories or strategies that theoretically could be used to control or suppress HABs and their toxins.

The oldest and most widely used approach to controlling HABs involves the application of a certain types of clay during blooms.  When sprinkled on surface waters during an algal bloom, the tiny but dense clay particles will “flocculate” or combine with other particles in the water, including the HAB cells. The process of flocculation is common in approaches to purifying drinking water as well as sewage treatment. As these aggregations, known as “flocs,” grow, they sink through the water until they reach the bottom. As these flocs fall, they capture additional particles, clearing the water as they descend. In some cases, as with the fragile cells of the Florida red tide organism Karenia brevis, the flocculation and sinking process can rupture cell membranes, killing the cell. In deeper water, darkness, prolonged contact with the clay, and eventual burial in sediments on the seafloor can also kill the algae cells.The practice of using clay to control algal blooms in the ocean is not new, with mentions in scientific literature dating back 30 years or more. Today, both South Korea and China routinely use clay to control algal blooms. In South Korea a clay called “yellow loess” has been used since 1996 to control blooms of a HAB species called Margalefidinium polykrikoides that have caused millions of dollars of damage to fish farms.  Many environmental studies conducted in South Korea have produced no significant negative impacts, leading to the adoption of clay dispersal as a routine element of HAB management in South Korea.This technology is not used in the U.S., but a new project supported by the Florida Fish and Wildlife Commission is exploring whether clay mitigation might help to control the catastrophic red tides experienced by the West Coast of Florida.  Additional information regarding the goals of this project, along with a list of FAQs regarding the use of clay dispersal for bloom suppression and remediation can be found HERE.

Use of biological control (i.e., release on one organism to control another) is widespread in agriculture. Examples include the use of pheromones or release of sterile males to control insect pests.  One example of a proposed biological control of one HAB species by another is the potential use of Amoebophyra, which is a syndinian parasite that infects several species of free-living dinoflagellates that cause HABs, including Alexandrium. However, opposition remains to applying such approaches in marine or freshwater systems due to frequently cited examples in which such an approach has had negative long-term consequences on land.  Biological controls of HABs therefore remain largely conceptual due to the lack of scientific research on their efficacy and concerns associated with unintended environmental impacts.

This approach involves the release of chemicals that inhibit or are lethal to HAB organisms, including the potential development of species-specific control agents.  As with biological controls, these strategies are primarily conceptual in nature, however, chemical control of HABs (Karenia brevis) was attempted in 1957 using copper sulfate, which was delivered with crop dusting airplanes.  Despite the dramatic reduction in of the size of the bloom, the broad lethality of copper resulted in considerable collateral mortality of other marine organisms, and this control strategy was not repeated.  In recent years, research has focused on using hydrogen peroxide (H2O2) to control freshwater blooms (cyanobacteria and Prymnesium parvum, or golden algae). Limited trials have indicated that controlled concentrations of H2O2 is deadly to Prymnesium parvum. Further investigation is still needed to determine how the peroxide mixes and disperses to ensure that it can be implemented effectively and safely, and to identify the optimum levels needed to suppress blooms while remaining harmless to fish and other wildlife.

This category includes strategies involving the physical or chemical modification of the environment so that either the target species is affected and/or a natural or or introduced biological control is enhanced.  Examples include manipulation of nutrient levels in coastal waters through pollution control policies, efforts to alter water circulation or residence times through dredging or opening of channels, and aeration or other efforts to disrupt stratification, thus altering phytoplankton community composition. 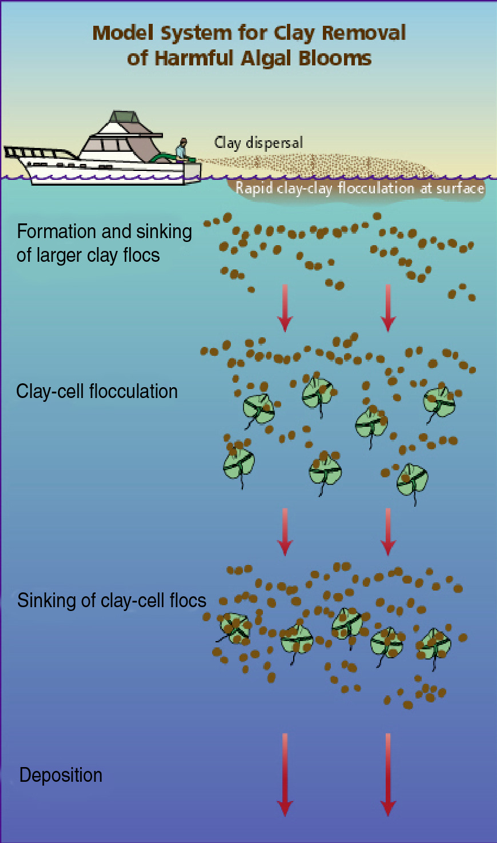 Schematic of the process of clay flocculation and removal of HAB cells as an approach to bloom control and suppression. FAQs regarding the use of clay dispersal for bloom suppression and remediation can be found HERE