Seabirds feed on the abundant life associated with oceans and estuaries and are thus susceptible to the effects of HABs. There is a long history of HABs impacting seabirds, from reports of red tide in the Gulf of Mexico during the 1800s killing seabirds to the mortality events, or “wrecks,” that commonly make news today. Most famously, Alfred Hitchcock’s iconic film “The Birds” was inspired by widespread reports of strangely behaving seabirds in the Monterey Bay region in 1961. While the source of this phenomenon was unknown, it was later discovered that Pseudo-nitzschia, the diatom responsible for amnesic shellfish poisoning, was present in the food chain at the time, and thus there is speculation that these birds were suffering from domoic acid poisoning. There are also reports of inland birds being affected by cyanobacterial outbreaks in freshwater ecosystems.

While seabird wrecks are frequently reported, establishing the cause of these deaths is challenging. Linkages between bird deaths and HABs are often based on incidence reports rather than comprehensive toxin analysis of tissues and stomach contents in affected individuals. It is not always possible to test bird carcasses for toxins, and is dependent on state of decomposition and proximity to analytical resources. Standardized necropsy protocols and implementation of systematic biotoxin testing are needed in order to establish definitive connections between bird mortalities and HAB species. Areas where mortalities have been observed are largely restricted to populated sections of coastline, leaving large gaps in coverage. Seabirds that live and feed nearshore are often identified as victims of HABs, but it is unclear whether this is because they are experiencing higher exposures during coastal HAB outbreaks, or are simply more likely to be observed by humans. There is also experimental and anecdotal evidence that some birds may be able to avoid algal toxins, either by regurgitation of contaminated food or selection of alternative prey.

A quarter of seabird species globally are listed as threatened or of concern, and their decline has been attributed to many environmental factors ranging from pollution to climate change. Seabirds are slow to mature and produce few offspring, which means that the mass deaths associated with HAB outbreaks come at a high cost and will impact populations for years to come. A more comprehensive understanding of HAB-seabird dynamics will help to inform conservation efforts as well as shape a broader picture of ecosystem health. Specific organisms and syndromes affecting bird species are outlined below:

Paralytic shellfish poisoning (PSP), caused by neurotoxins produced by the dinoflagellate Alexandrium, has been observed in bird species around the world, with the earliest 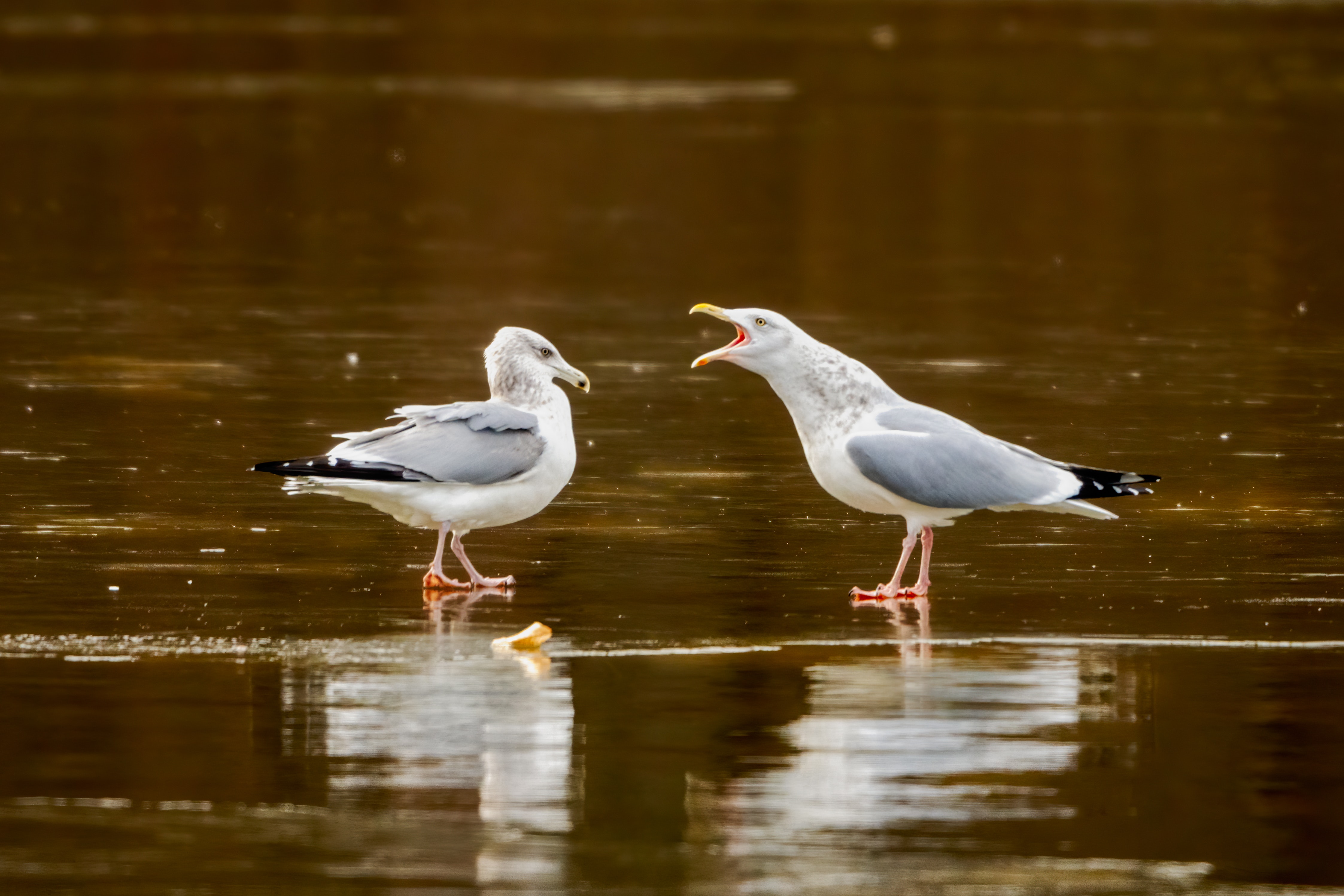 Herring Gulls are among the many seabird species impacted by PSP toxins. (T. Nord)

accounts of PSP in birds dating back to the 1940s. PSP related wrecks are widespread, and events have been reported in Northeast England, New England, Florida, Canada, Argentina, Alaska, and even North Carolina. The title “shellfish poisoning” can be misleading, because birds can also become sick when eating fish that have accumulated the toxin in their tissues, such as sand lance. PSP related wrecks have shown a broader range in recent decades, but the earliest accounts of PSP in birds are from the 1940’s and 1960’s. Symptoms in sick birds include impaired flight or swimming ability, difficulty breathing, vomiting and digestive inflammation, paralysis and death. Impacted species include Shag, Cormorant, Gannet, Gull, Atlantic Puffin, Duck, Common Murre, Penguin, Red-breasted Merganser, Northern Fulmar, Razorbill, and Kittlitz Murrelet.

Recently, saxitoxins from Alexandrium have been detected in Alaskan seabirds. The region has experienced widespread seabird die-offs over the past several years, but the primary cause of death in these events has been starvation. Toxins were found in both healthy and dead birds, raising questions as to whether PSP may have contributed to bird die-offs. More research is needed on these events, as well as sublethal effects that toxins may be having on Arctic bird populations.

Neurotoxic shellfish poisoning (NSP) is caused by the dinoflagellate Karenia brevis, which blooms frequently along the coast of Florida and in the Gulf of Mexico. The toxins produced by this species disrupt nerve cells and produce neurological symptoms in affected birds. Karenia brevis was implicated in bird die-off events as early as 1970, but it took several decades to establish a firm connection between Karenia and bird mortality. Affected birds include Cormorant, Brown Pelican, Gulls, Loons, Red-breasted Mergansers, and Scaups. 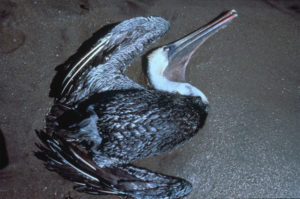 Amnesic shellfish poisoning (ASP) is caused by the diatom Pseudo-nitzschia which produces a toxin known as domoic acid. Pseudo-nitzschia blooms are common on the west coast of the United States, causing bird mortality in California and Baja Mexico. Birds become sick after eating contaminated anchovies and other forage fish. Symptoms of illness include tremors, neurologic symptoms, impaired flight and swimming, vomiting and death. Affected birds include Sooty Shearwater, Common Loon, Cormorant, Pelican, Western Gull and Common Murre. In Monterey Bay in 1991, more than 100 cormorants and pelicans were found dead or suffering from ASP symptoms.

While Akashiwo sanguinea is not toxic, blooms of this dinoflagellate produce a surfactant foam when exposed to wave action. This foam acts like a detergent, stripping away seabirds’ water resistance and causing them to become wet and hypothermic.  While hypothermia can be fatal, birds that wash ashore alive often respond well to rehabilitation efforts. Large blooms in 2007 and 2009 resulted in many washed-ashore birds in Monterey Bay, southern Washington and northern Oregon. Affected birds include Loons, Cormorants, Pelican, Grebe, Northern Fulmar, Sooty Shearwater, Strom-petrel, Common Murre, Rhino Auklet, Scotors and Gulls. Birds that feed near shore are at higher risk to encounter this dangerous phenomenon because this is where waves create the surfactant foam.

Diarrhetic shellfish poisoning (DSP) is caused by okadaic acid produced by the dinoflagellate Dinophysis. Consumption of contaminated seafood causes gastrointestinal distress in humans. This syndrome has not been directly linked to wreck events, but has co-occurred with other HAB species and toxins during mortality event. DSP is a suspected culprit in deaths of Black-legged Kittiwake in the UK. 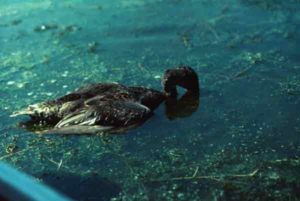 Dead duck during an Anabaena bloom

CyanoHAB is broad term used to describe toxicity caused by photosynthetic bacteria. These HABs are widespread, affecting freshwater ecosystems across the country. Microcystin and nodularin are two of the most common forms of cyanoHAB toxin, and are extremely hazardous to both people and animals. Archaeological investigation has shown a relationship between cyanobacterial mats in sediment records and animal remains, indicating that these fatal events have a long history. In 1934 it was demonstrated for the first time that cyanobacterial toxins are harmful to poultry. Since then, mass mortalities of birds have occurred in many locations around the world, including Tanzania and Kenya, the Great Lakes, and Belgium. Although they are most common in freshwater environments, some cyanoHAB species are salt tolerant and can pose a threat to coastal ecosystems. Furthermore, a condition known as Avian Vacuolar Myelinopathy (AVM) is believed to be caused by an epiphytic cyanobacteria that grows on aquatic plants. This neurological condition has been observed in American Coots, Mallard Ducks, and Bald Eagles. CyanoHABs are expected to increase in frequency and severity with climate change, leaving bird species vulnerable to further decline.