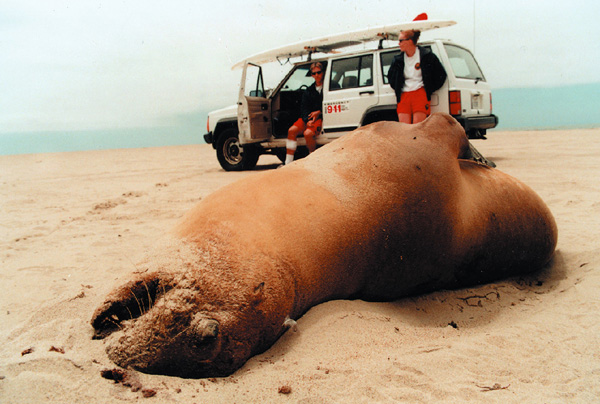 In addition to the human poisoning syndromes caused by HABs, they can also have devastating impacts to domestic and wild animals, and HAB events have been associated with massive wildlife mortalities.  Mortality events affecting aquaculture and farmed fish also have significant economic impacts, as large numbers of salmon and other farmed fish can be killed in just a few hours, succumbing either to toxins to other impacts from high algal biomass (e.g., mechanically clogging fish gills).

Algal toxins that accumulate in the food web can harm species at multiple trophic levels, including turtles, dolphins, manatees, and other marine mammals, including endangered species.  As techniques for detecting algal toxins in animal tissues have advanced, so has our appreciation of the number of marine mammal deaths linked to HABs.  More than 50% of the unusual marine mortality events, also known as UMEs, are now associated with HABs.  Sea lion mortalities are now almost annual events along the southern California coastline and many of these have been conclusively linked to domoic acid transferred through the food web.  The 2017-2018 HAB event caused by Karenia brevis caused mass mortalities of fish, sea turtles, manatees, birds, and dolphins.

In freshwater systems, HABs impacts to wildlife extend to birds and possibly alligators and other animals. Toxins associated with cyanobacteria, the major harmful algal group in freshwater environments, have been implicated as the cause of mass mortalities of fish and birds and have also been tied to the death of pets and livestock that may be exposed through drinking contaminated water or licking themselves after bodily exposure.  For this reason, dog deaths have emerged as an unfortunate early warning that a toxic cyanobacterial bloom is occurring.