Karenia is an athecate dinoflagellate genus, which lacks the cellulose thecae or "armour" typical of many other HAB organisms.  Consequently, these cells are delicate and lyse easily in coastal waters.  Karenia species exhibit a variety of morphologies, but cells of the primary toxin-producer Karenia brevis have a flattened cloverleaf shape around 18-45 μm in length. Although Karenia can form cysts like other dinoflagellates (such as Alexandrium), not much is known about the role cyst formation may play in its life cycle and bloom persistence. At high cell concentrations, Karenia blooms can discolor coastal waters, and are commonly referred to as red tide. The vast majority of bloom events in the U.S. are caused by K. brevis, which produce potent neurotoxins called brevetoxins.  These neurotoxins can accumulate in shellfish and cause Neurotoxic Shellfish Poisoning (NSP) when ingested.  In addition, brevetoxins can cause respiratory problems and other human health impacts when inhaled in aerosolized form.  This occurs when cells are ruptured during blooms and aerosolized brevetoxins are transported by winds along beaches.

Understanding and predicting Karenia blooms has been challenging due to the lack of a specific bloom season. For example, blooms frequently occur in the summer and fall, but during other seasons as well. Karenia can be found at very high cell concentrations close to shore where nutrient levels are often greater due to run off from land; however, the association between anthropogenic changes and Karenia bloom dynamics specifically related to eutrophication is is not fully understood. Some studies have found no association between bloom initiation and eutrophication, although high nutrient levels may contribute to bloom magnitude. The importance of specific nutrients in initiating and/or sustaining Karenia blooms is currently an important area for research and environmental policy as there is still debate as to which factors and conditions drive bloom initiation and dynamics.

Karenia brevis and Karenia mikimotoi are the two predominant species found in the United States, with K. brevis being the more toxic of two. The primary toxins of concern produced by K. brevis are brevetoxins. Brevetoxins are tasteless, odorless, heat  and acid stable, meaning they are difficult to detect and not removed by any sort of food preparation from contaminated seafood. These toxins bind and open voltage gated sodium channels in cell membranes, which are particularly important due to their impact on nerve cells. Most organisms cannot break down these toxins or excrete them, so they bioaccumulates and biomagnifies in the marine food web. Although most invertebrates that consume Karenia cells directly are not impacted by this toxin, it is very toxic to animal or human consumers. The associated illness in humans is known as Neurotoxic Shellfish Poisoning (NSP) and includes a variety of neurological and gastrointestinal symptoms. Some of these symptoms include disrupted cardiac, respiratory, neuromuscular, and thermoregulatory control.  During particularly large blooms of K. brevis there have been massive die offs in fish, seabirds, marine mammals such as manatees and dolphins and even turtles in the region, and remnants of the toxin can be found throughout the food chain.

This toxin also can impact organisms as an aerosol. Karenia cells are delicate as they lack cellulose thecae and are easily broken during any turbulence, such as wave action. When the cells are lysed, the toxins are released and have the potential to be aerosolized. Inhaling aerosolized brevetoxin can lead to respiratory problems. Studies have shown that these brevetoxin aerosols can be blown from the coast as far as a mile inland during a large blooms with strong onshore winds. Because of this, blooms are heavily monitored in these regions to detect brevetoxins in seafood and to warn the public of aerosolized toxins along beaches.

There have been no confirmed reports of direct impacts to human health by K. mikimotoi, although blooms of this species do cause large-scale mortality events of marine fauna such as shellfish, echinoderms, crustaceans, and fish. Karenia mikimotoi produces several toxic compounds as well as reactive oxygen species, but toxicity is highly variable among different genetic strains and the factors contributing to mortality events are still not entirely understood. Anoxic conditions can also occur when K. mikimotoi cells die in large numbers and subsequent breakdown by bacteria deplete oxygen in the surrounding waters. These anoxic events also contribute to wildlife mortalitites. 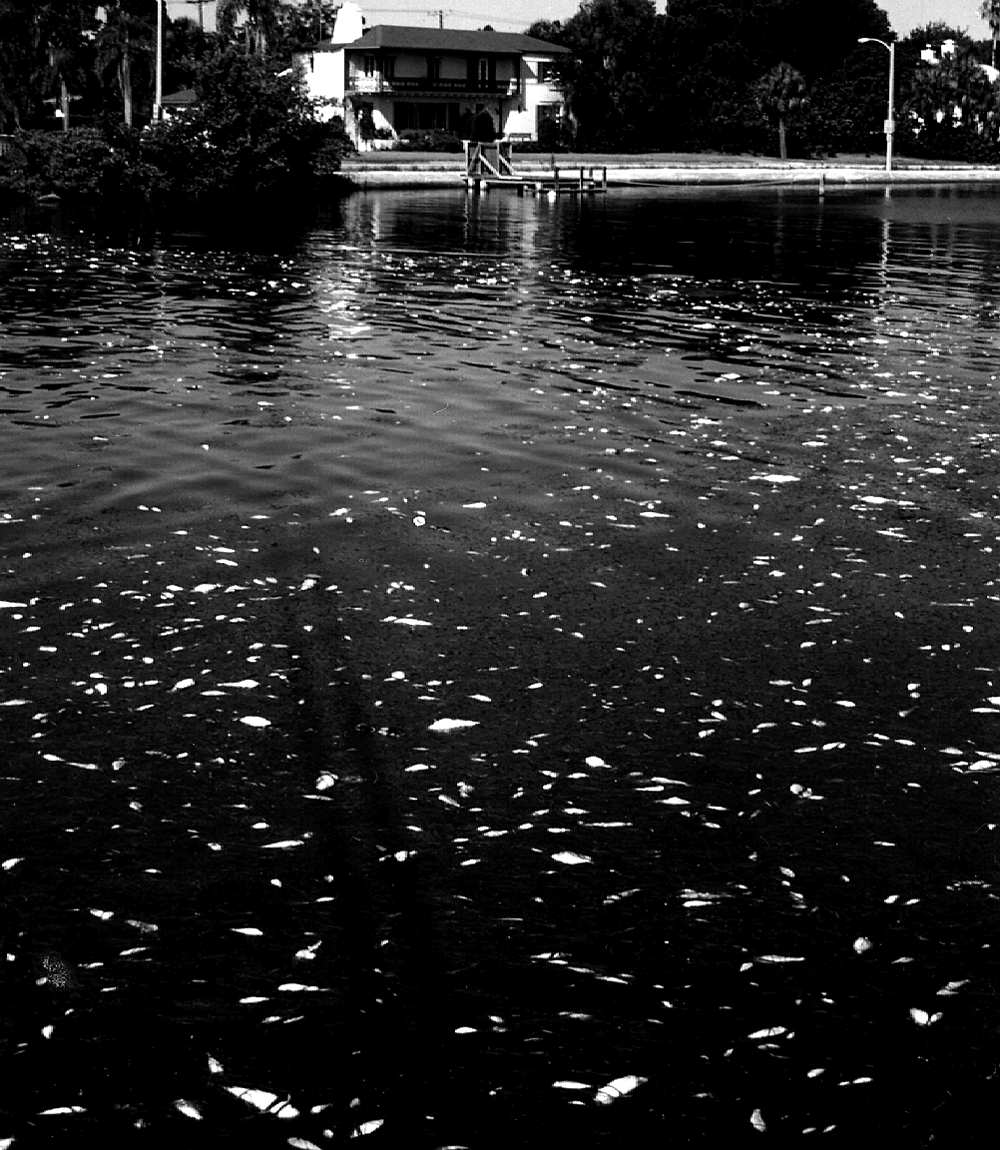 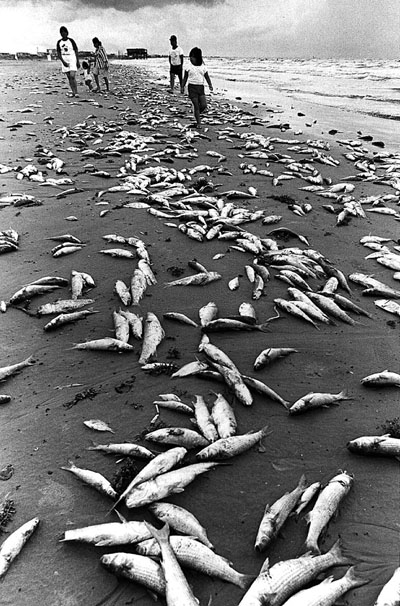 Fish kill caused by K. brevis along the coast of Texas (Brazosports).

Karenia brevis and Karenia mikimotoi are the two predominant species found along the East Coast of United States. Karenia brevis is distributed along the Gulf of Mexico and Atlantic coast up to Delaware, with NSP predominantly occurring along the southern end of this distribution (see NSP map). Karenia brevis is predominantly recognized for its large blooms off of the west coast of Florida, and has impacted this region of the U.S. since the 1800s, but is also found throughout the Gulf of Mexico in low abundances. In Florida, these blooms lead to significantly disrupted tourism and fisheries industries, which have cost local economies millions of dollars in damages on an almost annual basis.

Karenia mikimotoi was first isolated on the East Coast from a coastal lagoon near Woods Hole, MA in 1957 and at that time was classified as Gyrodinium aureolum. Since then, large blooms of K. mikimotoi appear to be an emerging problem in New England.  The first impacts of K. mikimotoi in New England were  reported in Maine in 2017, and coincided with a die-off of softshell clams. The mortality event cost fishermen $250,000, but a direct causal link between the bloom and shellfish mortality was not established. K. mikimotoi is also periodically found in Massachusetts waters, usually in the summer and early fall, but significant impacts to wildlife have not been reported.

Bloom of Karenia brevis off the coast of Alabama (DISL).