Pseudo-nitzschia is a widely distributed genus of marine diatoms including toxic and non-toxic species. The green, photosynthetic cells of Pseudo-nitzschia have bilateral symmetry with silica cell walls called frustules. In growing populations, they often create long chains of overlapping cells that glide through the water as a unit. They go through alternating phases of asexual and sexual reproduction. As they divide asexually, they get smaller and smaller.  Once they reach a minimum size threshold, they switch to sexual reproduction to return the population to the larger individual size. Unlike dinoflagellates, diatoms do not have a well-documented resting cyst phase, although some research suggests that they can have a “quiescent phase” to help the population survive unfavorable conditions. When the cells die, their silica frustules sink to the benthos and contribute to the earth’s sediment layers. Because of this prominence in the fossil record, they are used in a multitude of geological studies to understand phenomena such as climate change.

Pseudo-nitzschia species have a diverse temperature ranges allowing them to occupy variable habitats from the open ocean to coastal waters. Blooms are often associated with increased nutrients, high light levels, and warm seawater temperatures. Their blooms can be greatly enhanced by run off, eutrophication, and El Nino cycling where strong upwelling years foster blooms.  Climate-driven ocean warming and decreasing sea ice is expected to contribute to increased prevalence of Pseudo-nitzschia blooms at higher latitudes.

While many species in this genus are not toxic, approximately half are capable of producing a potent neurotoxin called domoic acid (DA), which can accumulate in filter-feeding shellfish, finfish, and zooplankton, and impacts the nervous system of human and wildlife consumers, including marine birds, mammals and humans. Although rare in humans, consumption of seafood contaminated with domoic acid may result in a potentially lethal syndrome known as amnesic shellfish poisoning (ASP), which can short term memory loss along with a suite of other ailments, including gastrointestinal distress and neurological symptoms such as headaches, confusion, memory loss, weakness, seizures. ASP can be fatal and mortalities have occurred.  There is no known antidote or cure for ASP, and while recovery is possible, some of the effects of domoic acid in humans can be permanent (e.g., memory loss).

Unfortunately, the effects of domoic acid poisoning are widespread in marine birds and mammals, particularly on the West Coast, where Pseudo-nitzschia blooms are responsible for sickening and killing mammals and seabirds on a near annual basis. Perhaps most notably, Alfred Hitchcock’s iconic movie, “The Birds” was inspired by a real-life event in California 1961, when hundreds of strangely behaving and dying seabirds were observed in coastal communities of Monterey Bay. At the time the cause was unknown, but it was later discovered that toxic strains of Pseudo-nitzschia were abundant in the anchovies that the seabirds were feeding on.  More recently, sea lions and other marine mammals in California have made the news for displaying disorientation and other symptoms of sickness. These animals are suffering from the effects of domoic acid toxicosis. 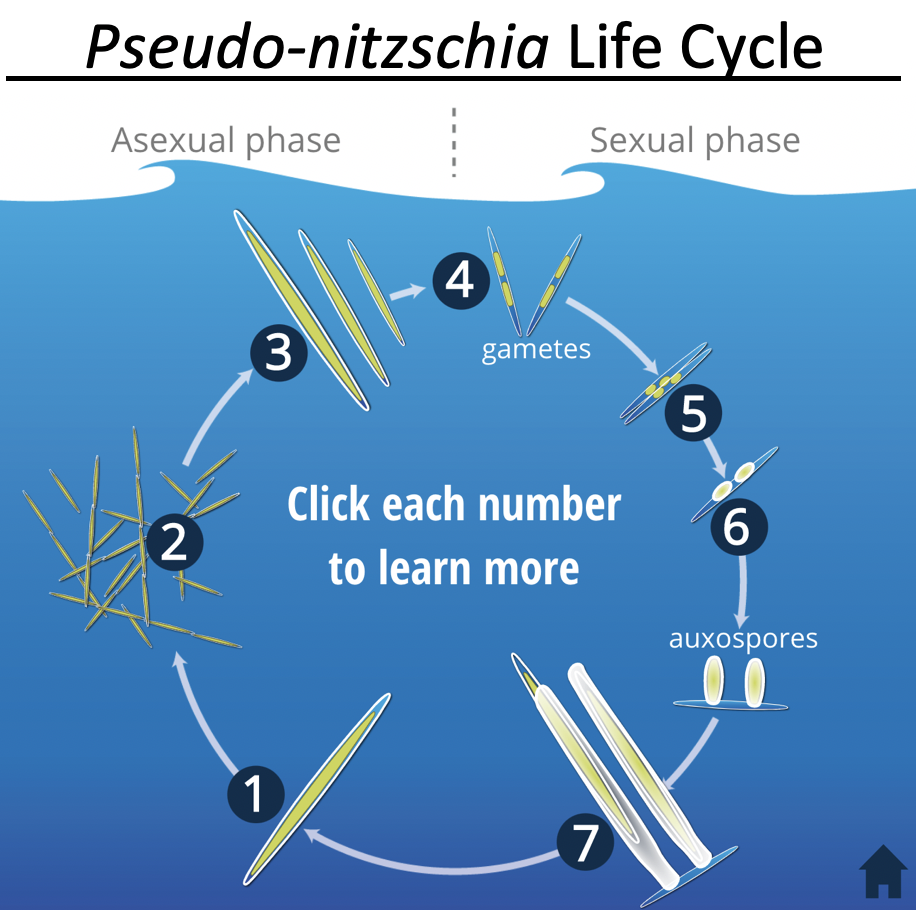 The Pseudo-nitzschia life cycle includes both sexual and asexual phases. Click on the image to learn more. 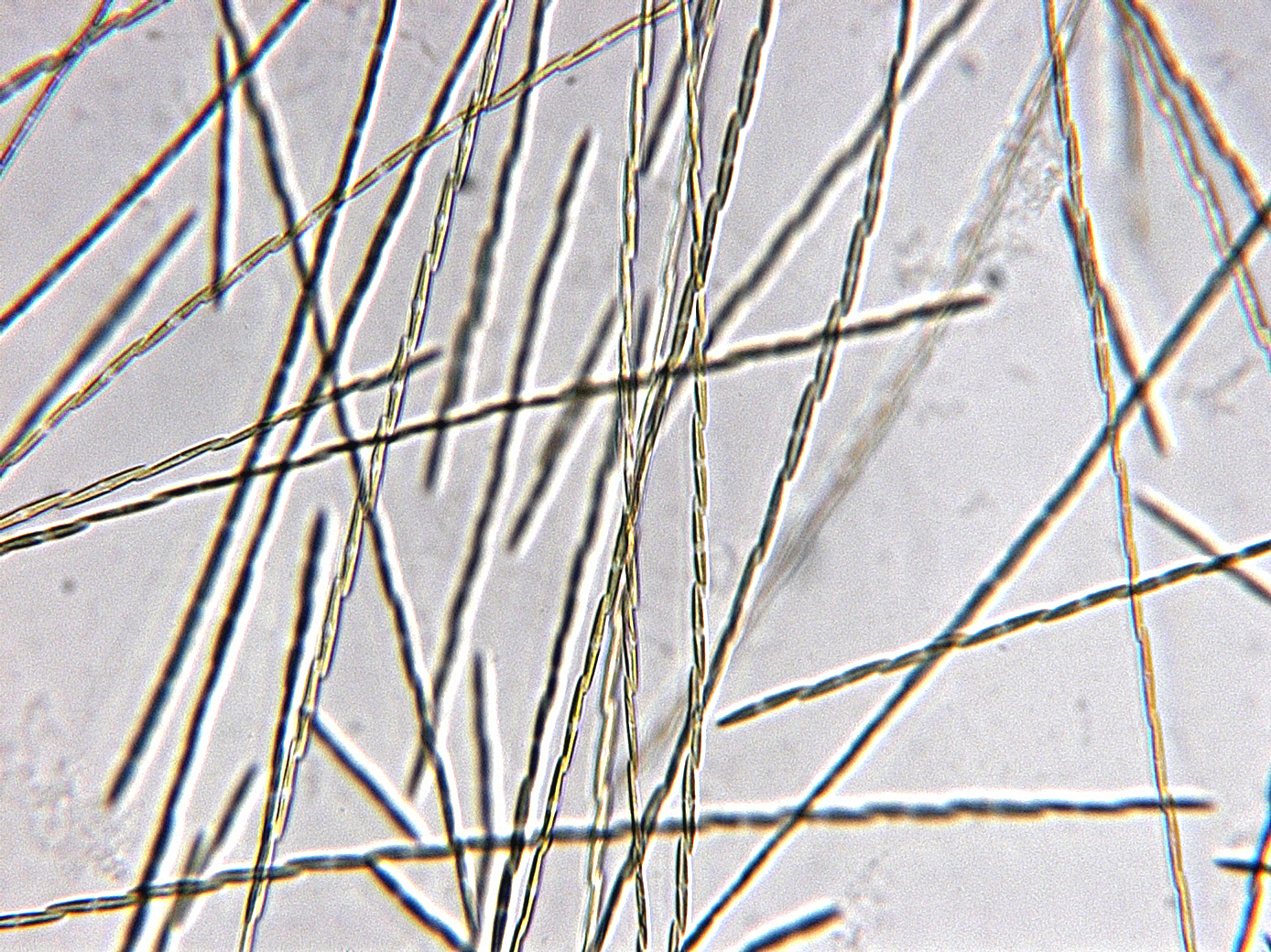 Chains of Pseudo-nitzschia sp. isolated from the Gulf of Maine. (L. Fernandes)

Impacts of DA-producing Pseudo-nitzschia blooms have been reported in coastal waters along the West Coast, Gulf of Mexico, and in the Gulf of Maine.  Closures due to DA were first enacted on the West Coast in 1991, and are now widespread, extending from Washington state all the way to Baja California. A particularly devastating bloom occurred in 2015-2016, which was associated with anomalously warm ocean conditions resulted in geographically extensive and prolonged closures of multiples fishers all along the West coast. This event  was the largest recorded in the region and was caused (in part) by the 2013-2015 North Pacific Marine Heatwave (aka the Blob). In contrast to this long history, DA-related closures in the Gulf of Mexico and the East Coast occurred relatively recently, in 2013 and 2016, respectively.  In the Gulf of Maine, toxic Pseudo-nitzschia species and DA were documented over many years of monitoring prior the first closures enacted in 2016, which also coincided with the first observation of P. australis in that region.  Additional closures associated with P. australis blooms in New England were enacted in 2017-2019. Shellfish closures were first imposed in the Gulf of Mexico in 2013; subsequent to this, closures were enacted in 2014 and 2017, all in the same embayment in northwest Florida. 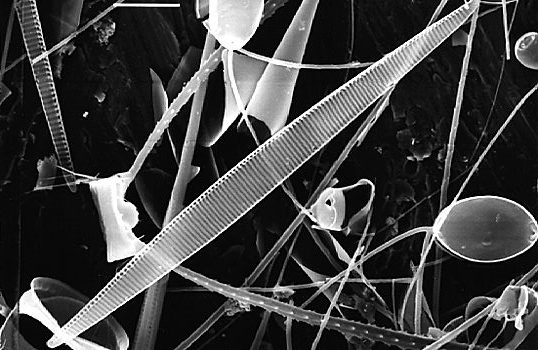