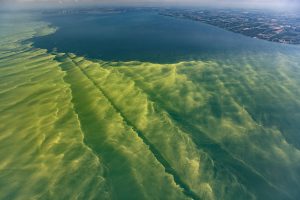 Cyanobacteria are the most prevalent harmful algal group in freshwater environments, presenting a rapidly expanding global threat to human and ecosystem health. Cyanobacterial harmful algal blooms (CyanoHABs) can manifest as visual discolorations in water bodies and, at times, surface scums that appear as paint-like slicks or clotted mats. Harmful effects of cyanobacteria can occur even when visible signs of a bloom are absent. CyanoHABs have been linked to animal deaths and human illness all over the world.

Through their long evolutionary history, cyanobacteria have developed unique adaptive capabilities that allow them to take advantage of variable environmental conditions.  Consequently, they can live and proliferate in many different environments. In recent decades, anthropogenic modifications to freshwater systems in the U.S. have allowed cyanoHABs to thrive.  Examples include increased nitrogen and phosphorus enrichment, hydrologic modifications that alter water flushing rates, food web changes (such as the removal of grazers), and introduction of toxins and pollutants that stress and kill other native members of the ecosystem. Successful watershed management to reduce nutrient loadings has been shown to successfully reduce cyanoHAB occurrence in some areas.

CyanoHABs have been documented in all 50 states, and 25 states have begun to issue health advisories related to cyanobacteria blooms. The majority of impacts in the U.S. have included taste-and-odor problems in drinking water and aquaculture resources, animal deaths, and reduced recreational opportunities. The most prevalent and problematic cyanobacteria is Microcystis aeruginosa, but other major offenders include the genera Planktothrix, Anabaena, Anthrospira, Oscillatoria, and Nostoc.

Cyanotoxins are a major threat to humans and other animals that may be exposed via contaminated water. These toxins have been linked to human deaths in other countries but to date, no human deaths in the U.S. have been definitively linked to cyanotoxins. Selected cyanobacteria and their toxins are included on the U.S. EPA’s Contaminant Candidates List, making it a priority to assess their occurrence in drinking water and their health effects so that it can be determined if actions regarding drinking water guidance, health advisories, or regulations are necessary. Legislative mandates in the Safe Water Drinking Act and the Clean Water Act require attention be paid to the presence of potentially harmful substances in drinking and recreational waters. Health advisories have been issued in 25 states but there are currently no specific federal guidelines or regulations for these toxins.

The presence of high levels of cyanotoxins in drinking water can cause gastrointestinal complications, liver damage, neurological symptoms, and potentially even death.  The public health impacts of chronic, low-level exposures are unknown.  Several researchers are investigating a possible link between a cyanobacterial-produced toxic amino acid (β-methylamino-L-alanine or BMAA) and neurological diseases, such as Alzheimer’s. Evidence has not been conclusive and this is still an area of active research.

Recreational exposure to toxic cyanobacterial blooms via direct skin contact, inhalation, or inadvertent ingestion of water can cause rashes, allergies, gastrointestinal problems, and occasionally death for people working or recreating on the water. Cyanotoxins can also be ingested by consuming fish or shellfish from contaminated water. The long-term effects of such exposures or the effects of inhalation of toxins are not well known either.  Because the adverse effects of cyanotoxins restrict their use in experimental studies, it is difficult to develop scientifically-based safety guidelines for human ingestion and inhalation.

Additional detail regarding the impacts of cyanotoxins on human health can be found HERE.

Ecosystem impacts stemming from the effects of non-toxic, high biomass cyanobacterial blooms are well documented. Fish kills stemming from low oxygen events are perhaps the most common adverse impact of large cyanoHAB blooms. High biomass blooms can also block sunlight penetration into the water column, inhibiting growth of beneficial algae. This in turn disrupts aquatic food webs, as cyanobacteria are comparably unpalatable and of low food quality for grazers.  These conditions can leading to a die-off of marine organisms at lower trophic levels that echoes up the food chain.

The toxicity associated with many cyanoHABs can exacerbate the nature of these impacts on aquatic ecosystems, but the importance of toxicity relative to the stressors described above is unclear. Cyanotoxins can accumulate in the primary consumers and potentially be transferred up the food web, concentrating in larger organisms. Cyanotoxins have been implicated in mass mortality events of both fish and birds, and have also been tied to the death of pets and livestock through consuming contaminated water or licking themselves after bodily exposure. Furthermore, cyanobacterial biomass frequently accumulates as clotted mats, posing a particular threat to dogs who may lick or eat the toxic mats. The impacts of cyanoHABs are not limited to freshwater systems, as for example, a 2007 cyanobacteria bloom in California rivers was carried out into Monterey Bay, resulting in the deaths of several dozen sea otters.

Freshwater HABs are becoming a major economic issue for managers, as treatment methods are frequently costly and inconvenient while also proving ineffective beyond the short term. Some species are vulnerable to herbicides, but dense, mat-forming species are not. Physical removal by hand or with machinery is costly, and species are quick to grow back. Fish or waterfowl grazing programs entail waste disposal and animal management issues.

CyanoHABs can have significant economic and sociocultural impacts due to the human health threats and their negative impact on aquaculture, recreation, and tourism. We are just beginning to quantify these numbers, and are far from a comprehensive figure to describe the impacts of cyanoHABs. In the U.S., toxins and taste-and-odor compounds (geosmin and 2-methylisoborneaol, or MIB) result in increased treatment costs for drinking water facilities and algal mats can interfere with reservoir operations, clogging drinking water and hydroelectric intakes. Furthermore, off-flavor compounds are second to disease as the major cause of economic losses for catfish aquaculture and have been estimated to result in as much as $60 million in annual economic losses for the industry (at 1998 prices, which is about $93 million in 2019 dollars). Closures of recreational water-bodies to protect human health can result in massive revenue losses for local communities, especially during holiday weekends or planned events. Reduced aesthetic appeal and negative perceptions of drinking or recreational water safety can lessen the quality of life and property values for local communities.