The nature of HAB problems has changed considerably over the last several decades in both marine and freshwater systems. Whereas 30 years ago the problem was scattered and sporadic, today virtually every state is threatened by harmful or toxic algal species. Few would disagree that the number of harmful blooms, their economic impacts, the resources affected, and the number of toxins and toxic species have all increased dramatically in recent years in the U.S. and around the world.

There are several reasons for this expansion, including both natural and human-mediated. The organisms responsible for HABs have been on earth for a long time, so seemingly “new” bloom events may also simply reflect better detection methods and increased observations rather than species introductions or dispersal events. For example, the appearance of ASP along the west coast is not attributable to a recent introduction or coastal pollution, but rather to increased communication among scientists and improved chemical detection methods that led to the identification of a toxin that was surely present in those waters for many years. Another factor contributing to the rise in HAB detection is the dramatic increase in aquaculture activities over the past few decades, which necessitated increased monitoring and led to the discovery of toxic algae that were probably always there.

Many also believe that pollution or other human activities are involved. On closer inspection, however, many of the new or expanded HAB problems in the U.S. occurred in waters where pollution is not an obvious factor. For example, a massive 1972 bloom was responsible for introducing dormant cysts of the PSP-producing species Alexandrium catenella to southern New England waters. After this introduction, these waters experienced sporadic outbreaks until a massive HAB event occurred in 2005 that was unprecedented in geographic range and intensity. Although those coastal waters have seen an increase in pollution over the years, the initial introduction of the species and subsequent outbreaks were primarily the result of ocean currents and environmental forcings, such as a hurricane which preceded the 1972 bloom and the unusual weather patterns that occurred prior to the 2005 event. Pollution may have enhanced subsequent blooms of this species; however, this has not been conclusively demonstrated.

However, the linkage to pollution should not be ignored as increasing nutrient inputs into our coastal waters can stimulate the growth of naturally-occurring populations of microscopic and macroscopic algae (seaweeds) to bloom proportions. Some scientists argue that the nutrients inputs to coastal waters are delivered in proportions which differ from those that naturally occur, and alter the species composition of the algae by favoring the growth of certain groups that are better adapted to our nutrient supply ratios.

One way to view the expansion of HAB phenomena in the U.S. is that we are better defining the boundaries of the problem - boundaries that may be expanding somewhat due to pollution or other global change issues, but which were always bigger than we thought. As we identify new toxins and new toxic species, we begin to understand the true nature and extent of the problem. This does not negate our concern about the expansion, nor does it alter the manner in which we must mobilize resources to mitigate HAB impacts. The national HAB problem is serious and large - much larger than we thought. If it is also growing due to human activities, then our concerns are even more urgent. 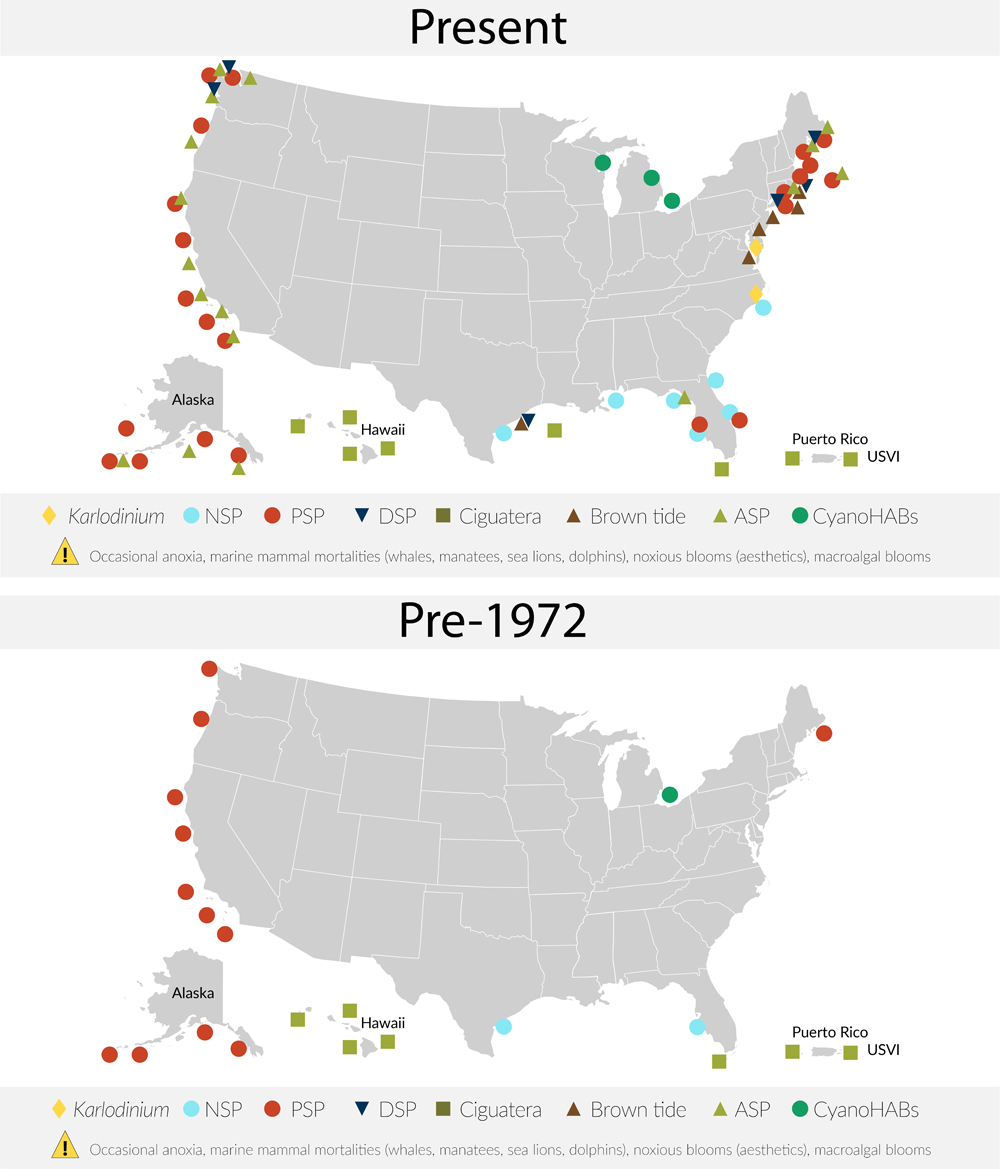 Reports of harmful algal blooms in U.S. waters and around the world have drastically increased in the past four decades. Researchers attribute the increase to pollution, coastal development, and other factors, as well as improved detection and awareness of HABs by coastal monitoring programs (2019 Update).