Impacts of HABs on Marine Mammals 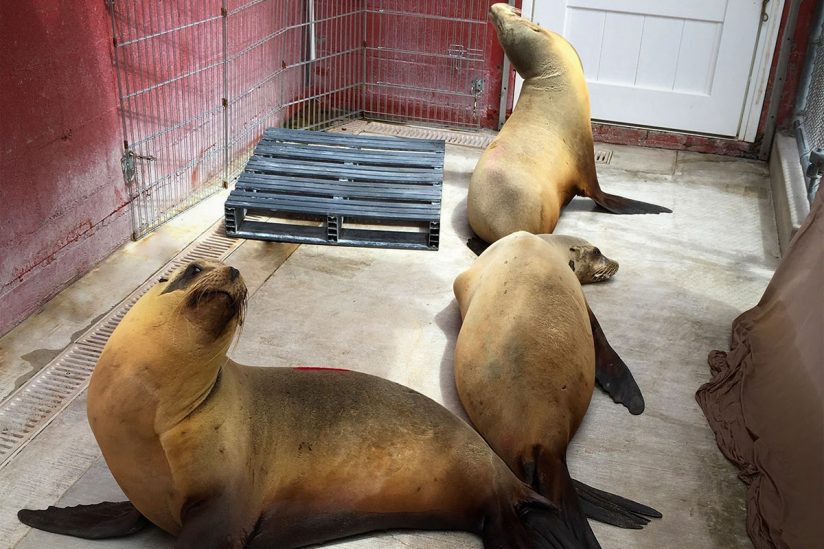 Just as human consumers of seafood contaminated with biotoxins of algal origin are at risk, animals at higher levels of the marine food web such as marine mammals are impacted by HABs.   Exposure to algal toxins can occur directly through inhalation of aerosolized algal toxins, but more often occurs indirectly through food web transfer.  Impacts of HAB toxins to marine mammals include mortality as well as sub-lethal effects. In extreme cases mass strandings or die-offs have been observed, some affecting multiple species.  Long-lived and/or highly endangered species are particularly susceptible, as mass mortalities in which a significant number of individuals perish can have devastating consequences to a local population, while repeated exposure can can compromise health in more subtle ways that influence species survival. Many coastal regions of the U.S. are impacted by more than one HAB species, raising concerns regarding the effects of simultaneous exposure to multiple algal toxins.  Major groups of HAB toxins associated with marine mammal mortality and morbidity are summarized below.

These toxins are produced by Karenia brevis, the causative organism of devastating red tides in Florida.  Blooms of K. brevis affect marine animals at all trophic levels, including invertebrates, fish, turtles, birds, and a variety of marine mammals.  Florida manatees and bottlenose dolphins are most frequently affected.  Reports of manatee deaths associated with Florida red tides date back to the 1960s, and mortality events have been reported periodically in subsequent decades.  In 1996, more than 150 deaths of the Florida manatees occurred due to brevetoxin poisoning during an extensive and intense K. brevis bloom. At that time, estimates suggest that about 10% of the endangered population was killed by this HAB event. Both stomach contents and lung tissue contained the toxins, suggesting that toxin exposure occurred via the food web as well as from direct contact of the toxic aerosols when the animals broke the surface to breathe. Manatee mortalities associated with brevetoxin exposure were reported in southwest Florida in 2002, 2003, 2005, 2007, 2013, and most recently during the severe and long-lasting red tide in 2017-2018.  Similarly, dolphin strandings and mass mortalities have long been in association with K. brevis blooms. In 2003, 107 bottlenose dolphins (Tursiops truncatus) were found dead, together with hundreds of fish and marine invertebrates along the Florida Panhandle.  Despite the absence of a concurrent bloom of K. brevis, high levels of brevetoxin were measured in all stranded dolphins examined (tissues and stomach contents), as well as in their fish prey (undigested menhaden recovered in dolphin stomach contents).  Although brevetoxins were suspected in a dolphin mortality event in the same area in 2000, this was the first time that brevetoxin involvement was unequivocally confirmed in all tested animals and that the role of vectors in the poisoning was unambiguously identified.  This event has indicated that lethal doses of brevetoxin can be transferred through the food web and that marine mammal mortalities can occur in the absence of a bloom. 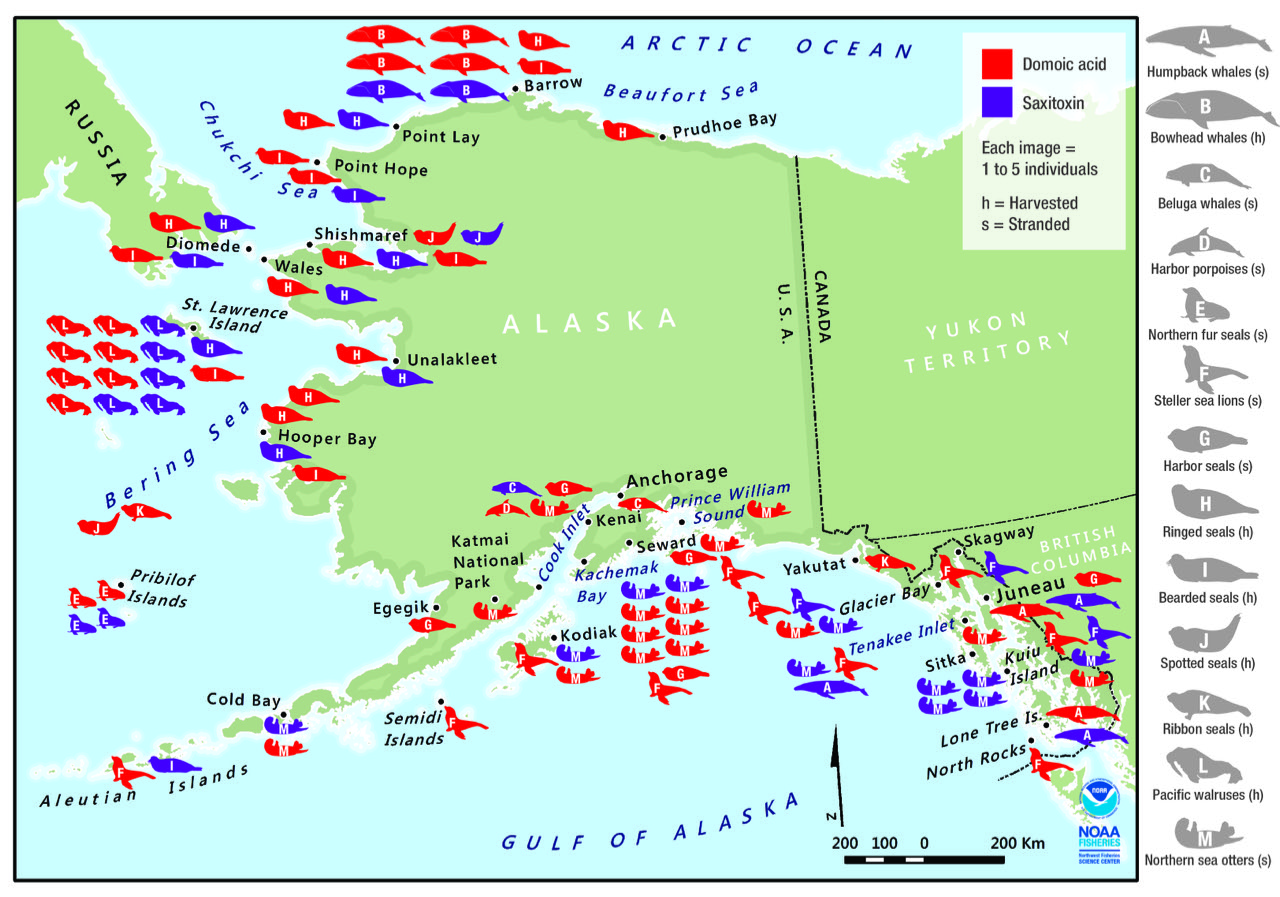 Of the major HAB toxins, domoic acid has had the most widespread, frequent, and severe impacts to marine mammals. Domoic acid is produced by several diatom species in the genus Pseudo-nitzschia, and causes domoic acid poisoning in wildlife and amnesic shellfish poisoning in humans.  In the U.S., impacts to marine mammals - primarily pinnipeds - have included numerous strandings and mass mortalities, which recur on a near annual basis along the California coastline. Animals surviving domoic acid intoxication may have impaired survival and decreased reproductive potential, and frequently suffer neurologic deficits.  In California Sea Lions, acute domoic acid poisoning affects more adult females than males, and has has also been measured in amniotic fluid from pregnant individuals, raising concerns regarding the impacts of this marine toxin at the population level. In addition to frequent and severe impacts to pinnipeds, numerous cetacean mortality events have been linked to domoic acid, and have included several whale, dolphin, and porpoise species.  Although domoic acid poisoning is well known along the west coast of the US, until recently little data existed regarding the prevalence of these toxins in Alaskan coastal waters, which are important feeding grounds for both cetaceans and pinnipeds.  A recent and extensive investigation of domoic acid and saxitoxin exposure in this region included a sample size of over 900 individuals comprising 13 species that were either stranded or harvested.  Domoic acid was present at detectable levels in the 13 marine mammal species sampled, which included humpback, bowhead, and beluga whales, harbor porpoises, and several pinniped species. In addition, saxitoxin was detected in 10 of the 13 species, and 46 individuals contained both toxins, indicating the potential for exposure to multiple toxins, and susceptibility to acute and chronic effects associated with each toxin group. 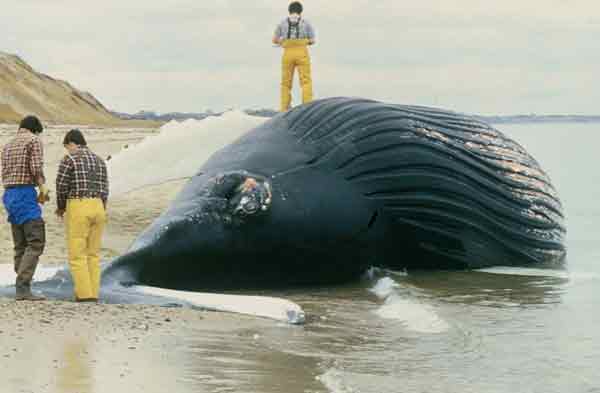 One of 14 humpback whales that died near Cape Cod, MA in a one-month period due to saxitoxin in mackerel that they had consumed. (G. Early)

This suite of toxins are produced by certain species of Alexandrium, Gymnodinium, and Pyrodinium dinoflagellates, and cause the human seafood poisoning syndrome Paralytic Shellfish Poisoning (PSP).  One of the earliest and well-known mass mortality events occurred in 1987, during which 14 humpback whales died near Cape Cod, MA in a one-month period of suspected exposure to saxitoxin in mackerel that they had consumed.  The apparent bioaccumulation and trophic transfer of PSP toxins through a fish vector raised concerns regarding the impacts to marine mammal health in the Gulf of Maine region, which experiences intense blooms of toxic A. catenella on an annual basis and is a major feed ground for several whale populations, including the critically endangered North Atlantic right whale.  Saxitoxin exposure was also suspected to have contributed to mass mortalities of highly endangered Mediterranean monk seals along the coast of northwest Africa in 1997, during which 100 animals died (representing one-third of the world's population). Most recently, an investigation of biotoxin exposure in Alaskan marine mammals (discussed above) found that 10 of the 13 species surveyed had detectable concentrations of saxitoxin, which were present in 13% of the 830 animals sampled.

The toxins associated with diarrhetic shellfish poisoning (or DSP) include okadaic acid and dinophysis toxins (DST), which are produced by two dinoflagellate genera that are widespread in tropical and temperate regions. While DST exposure has not been documented in marine mammals, exposure to okadaic acid was documented during a bottlenose dolphin mortality event in Texas in 2008, in which over 100 animals stranded.  Domoic acid was detected in three individuals as well as okadaic acid, demonstrating exposure to multiple toxins. Okadaic acid was also detected in several South American sea lions and Peruvian fur seals in 2012.  These animals were tested during haul-out, and were not stranded.  Data regarding the identification of vector species, timing of exposure following HAB events, and the potential acute versus chronic effects of these toxins on marine mammal health are poorly known.  Sublethal effects impacting reproductive success are of particular concern for populations that are exposed seasonally to HAB toxins, particularly during their breeding season.

These toxins are responsible for ciguatera poisoning in humans, which is widespread in tropical and subtropical regions.  However, the potential impacts that these lipid-soluble toxins have on marine mammals are poorly known and difficult to confirm.  Ciguatoxins are suspected of contributing to the decline of critically endangered Hawaiian monk seals in the Northwestern Hawaiian Islands, and have been detected in blood and body tissues of dead stranded animals at levels eliciting symptoms of toxicity in laboratory rats.  Evidence of trophic transfer and exposure to significant levels of ciguatoxins in the food web indicates that these toxins should be considered in investigating health or mortalities of marine mammals in ciguatera-endemic regions.

In addition to the above toxin groups, there are several HAB toxins present in marine and freshwaters with the potential to impact marine mammals, including Azaspiracids, Yessotoxins, and Spriolides, as well as various types of toxins and irritants produced by freshwater and marine cyanobacteria.  For the majority of these toxins, impacts to marine mammals have not been demonstrated, and in some instances (e.g, azaspiracids, spirolides) the mechanism of toxicity is unclear.  Microcystins produced by several freshwater cyanobacteria genera (most notably Microcystis but also Anabaena, Cylindrospermopsis, Oscillatoria, and Planktothrix) have been linked to marine mammal mortalities along the California coastline, including the deaths of 21 southern sea otters in Monterey Bay in 2007.  In these incidents, illness and death were associated with microcystins that originated in freshwater lakes, and entered coastal waters via riverine discharge.